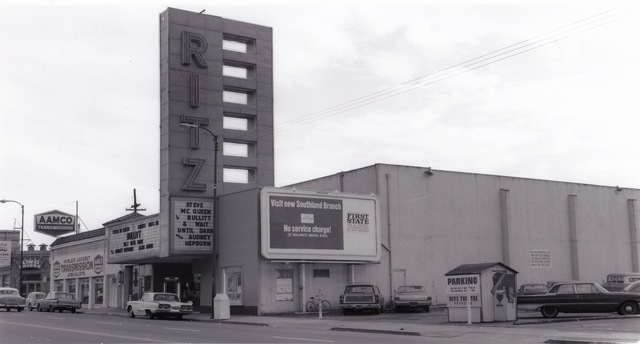 The Society of St Vincent De Paul (a Catholic organization) bought the theatre and turned it into a thrift store selling used furniture and clothing.

The store closed in 2002 and was afterward demolished and a health care clinic built on the site.

The mention of the big sign the Ritz had intrigues me. I never saw it. I first drove by the Ritz in its last days, and, while the entry—terrazzo, box office, doors, display cases—marked it as an older theatre, the plain, plastic-clad triangular marquee and sign were in no way spectacular and of much later vintage, though the marquee soffit appeared to be original. Vertical sign photos, anyone?

The Mitchells did change the signage shortly after acquiring the theater.

Does anyone have photos of any of the Hayward theatres during their heydays?

I have a copy of a photo collage given to me recently by the daughter of former manager, Sol Bolnik. I worked as an usherette 1961-62.

That would be the Ritz Theater.

If you would like to see what the original marquee of the Ritz looked like, look at the Sunset Theater in Lodi California. I wonder if they were built by the same person, as the building and marquee are exactly the same, except the Ritz had a green vertical with the ritz letters in red.

The address listed above will direct you to a smog shop across the street. The correct address in google maps is 22331 Mission Boulevard.

According to Jack Tillmany’s extensive, and carefully researched, listings of theatre opening dates, the Ritz opened on Sept. 7, 1949.

Hi all, I’m looking for any photos of the Ritz, interior or exterior, from its heyday as I’m working on a National Register nomination for its sister theater, the Sunset, in Lodi CA. Any information on Ritz architect / builder that can be documented would be a great help. Also, supposedly there were two other theaters of this same design based on a previous comment on this site… any clue where?