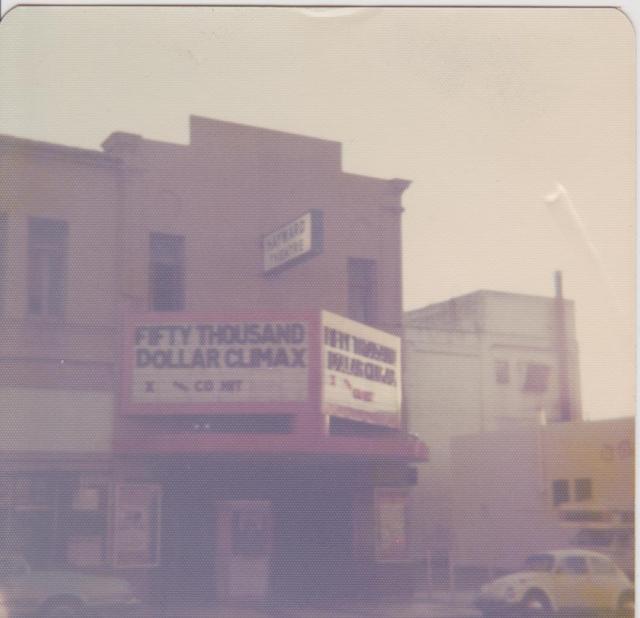 The Hayward Theatre was built in 1926 at a cost of $175,000 and owned by the Golden State Theater and Realty Corp. It opened on March 18, 1926 with Reginald Denny in “California Straight Ahead” plus vaudeville on the stage. During the early years, it showed silent films and had vaudeville acts on Sunday evenings. This theatre was once considered “the entertainment center of Hayward” and was located in downtown Hayward on Mission Boulevard near A Street.

In the early-1970’s, it, along with the Ritz Theatre up the street, had suffered from declining attendance due to a (then) declining downtown and multiplex theatres built in the western part of Hayward.

Ironically, the last movie house in Hayward, the Festival Cinemas 9(originally a 4 screen that opened in 1971) will be closing at the end of this month, as the city of Hayward pulled that theater’s lease. Hayward is looking to build a multiplex on city-owned land in its downtown area as part of a downtown revitalization project. The proposed site is 3 blocks from where the Hayward theater stood.

Seating capacity for the Hayward Theatre is given as 1,235.

The Hayward Theatre contained a 2 manual 7 rank Wurlitzer style E.
The organ was removed and installed in the Sacramento area home of the late Larry Weid. Larry sold the organ to Sierra Chapter, American Theatre Organ Society in the early 1970s. Sierra Chapter installed the organ in the Golden Bear Playhouse on the California State Fair grounds. The organ was later moved, almost doubled in size and installed in the Fair Oaks Club House in Fair Oaks. The original console from the Hayward has also been replaced with a console of Robert Morton manufacture.

Here is an October 1964 ad from the Oakland Tribune:
http://tinyurl.com/cue5rm

Here is a June 1974 ad from the Hayward Daily Review:
http://tinyurl.com/ootmfe

Just downloaded a photo of the Hayward, taken in august 1976, the day right after the fire.

Glad to know the Hayward’s Wurlitzer organ still exists and is in use!

According to “The Encyclopdia of the American Theatre Organ” by David Junchen, the “Hayward Theatre” in Hayward had a two-manual Smith theatre pipe organ installed at some point.

The size of the organ (# of ranks), year of installation, and other info (blower info etc) are not given in the book.

I would imagine that the Wurlitzer model E probably replaced the Smith, as Wurlitzer, then as now, was usually considered the “end-all, beat-all” of theatre pipe organs (although I know several Robert-Morton and Barton enthusiasts who tell me that those respective makes were the “end-all, beat-all” of theatre pipe organs!!! They’re all great, it’s strictly in the ear and personal taste of the beholder).

Does anybody know what became of this Smith organ, or its parts? I would imagine that it was probably taken by Wurlitzer in trade for the new organ, IF the book is correct and this theatre did in fact have a Smith organ.

(1926 is pretty close to the advent of sound movies for the organ to have TWO theatre organs in quick succession, but I do know that Smith organs have not been well-liked by many).

Thanks a lot for any info!