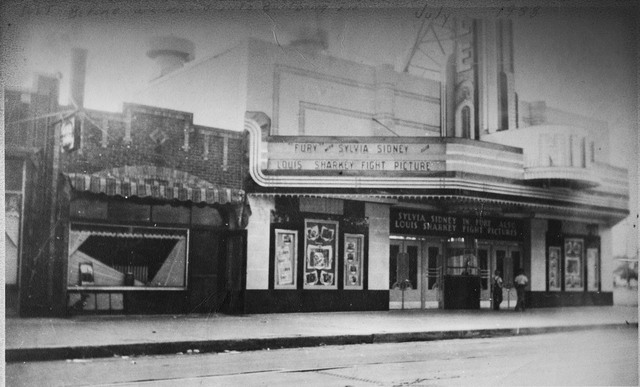 Originally opened in 1926, the Nile Theatre could seat just under 300. It was purchased by local businessmen Sidney and William Volk in 1932. Two years later, it was destroyed in a blaze.

It was designed by architect Perry Crosier, who went on to design the Hopkins Theatre in the suburb of the same name several years later. The decor was an Art Deco-Egyptian hybrid, complete with Egyptian lobby furniture, and several large panels copied from ancient Egyptian temples covering the auditorium’s walls. The hieroglyphics spelled out greetings and blessings for theater patrons.

The Nile Theatre also contained a sound-proof mother’s room, towards the rear of the auditorium, cutting edge projection equipment, and a parking lot for room for more than 500 cars.

In the early-1960’s, the theatre was somewhat modernized, though none of its 1930’s decoration lost. The Nile Theatre was included in a 1963 article in Life magazine on movie houses.

Falling into decline beginning in the 1970’s, the theater was closed in 1982 and torn down soon afterwards.

Any pics of the exterior would be greatly appreciated

Here is a re-post of the interior photo in the link above:
http://tinyurl.com/jfl66

There is an one error in the Krefft text. The Egyptian wall decoration was covered over in the 1960’s with painted acoustical ceiling tiles and the entire 1930’s decor was removed and replaced with the mid-century modern designs and light fitures. The basement was turned into a lounge with a snack bar with black vinyl bar stools and about 100 black midcentury chairs with chrome bases that swiveled; and, bright red, yellow, orange, and avocado seat cushions. There was a large 23 inch black and white TV built into the wall. There was a crying room on the second floor. A small addition was built to one side that contained the manager’s office and a stairway to the basement lounge and the exit doors. I attended several shows in the late 1970’s and was told the show was cancelled because there wasn’t enough people in the audience. After making a 30-minute bus ride there on the 23 bus, I stopped attending evening shows there because of the hourly service at night and the wait in the subzero temperatures. This corner also housed a very, very popular Italian restaurant, beauty shop, bar, corner superette, 1960’s era supermarket, hardware, and a very large drug/gift store. All of those businesses are now gone and most of the stores are for rent. There is a very large nursing home built on the Nile site. It is called “The Nile”.

There is no other movie theater on the planet that meant more to me than The Nile.
Especially on Saturday afternoons!

An always kid-crowded mass of wide eyes and excited noises, who paid their 35-cent admission (and doubled that for candy and popcorn) for the trip to a world of their own, few adults anywhere in sight, eager for a few hours entertainment geared strictly toward them.

The Nile was located in South Minneapolis but it doesn’t matter if one’s favorite memories are there or in South Philadelphia or South Dakota or South America, a favorite place has a reason for being so.

This was my neighborhood theater, from 1958 – 1968, a span of 10 years that took me from 3rd grade through graduation from High School.
Although we lived at 3 different addresses in South Minneapolis during that time, the only substantial difference was moving from west of Cedar Avenue to east of it, never more than 2 blocks either side of 38th Street.
The Nile was located almost at the intersection of 38th Street and 23rd Avenue, where those 2 streets form a ’T' intersection.
And in 10 years, we never lived more than 7 blocks away from it.

How much more important “going to the movies” was during a time when almost no one owned a color TV (ABC & CBS didn’t join NBC with prime time color broadcasts until 1965) and there was so much more to the experience than just seeing the feature attraction!

Multiple cartoons, of course, but short-subjects from ‘The Three Stooges’ or the short ‘B’ films of ‘The Bowery Boys,’ were inevitably a part of the several hours that culminated in the feature itself.
And what features they were!

During the late 50s and early 60s I saw almost every now-classic science fiction & fantasy flick at The Nile. Kerwin Matthews in Ray Harryhausen’s “7th Voyage of Sinbad” and again in “The Three Worlds of Gulliver,” George Pal’s “Time Machine,” William Castle’s “13 Ghosts” (with the red/blue cardboard viewer enabling you to see or not see the ghosts when they appeared in the story). Fantastic films feasted upon by an impressionable imagination down the aisles of The Nile Theater.

Other genres as well: Gangster movies such as “The Purple Gang” and combat dramas from WWII (“Battle of the Coral Sea”) or from the Civil War (“The Little Shepherd of Kingdom Come”). A Western now and then, a few comedies of the “Abbott & Costello Meet Frankenstein” variety, but never, ever, a single, girlish, ‘Romance Movie’ or any kind of boring, kissy-face ‘adult drama.’

The Nile management knew its audience and never disappointed!

By the time I was in Folwell Jr. High, 2 blocks from The Nile, I grew much more interested in the kind of movies girls like.
Thus began the ‘dating years’ and night-time movies.

Regardless of where THEY lived, The Nile was my theater-of-choice for taking dates. No co-incidence, of course, that it was a short walk thereafter, back to my place where smuggling a young lady into my basement was quick, easy and…let the curtain fall on the thought.

“Goldfinger,” “Bonnie & Clyde,” “Dr. Zhivago,” “Not With My Wife, You Don’t!,” are among the highly-memorable Nile-seen movies during the mid to late 1960s — not strictly because of the quality of the films!

When I left Minnesota in the summer of 1981, it never occurred to me that The Nile would soon be gone forever. Even though I returned for regular visits it had already been demolished by the time I heard about its closing. I’ve been back living in Minnesota for many years but visits to the old neighborhood are never quite what I want them to be.

Other people have told me that their worst fears of impermanence are realized when one of their childhood schools is torn down.
Bancroft Elementary, Folwell Jr. High, and Roosevelt Sr. High were the schools I attended during the time I’ve been describing. They all still stand.

But The Nile theater stands only in memory.
And in many ways it was the most important school of them all.

Here is an item from Boxoffice magazine, January 1946:

Man, I miss the Nile! I grew up just 7 blocks away and my first movie experience was there. It was “One of our Dinosaurs is Missing.” Being born in 1967, I was on the tail end of the Nile’s existance. I remember their last movie before closing was also the first movie that had shown there. “Showboat” I believe it was.

Yess. thanks for the 82 pics. I too grew up not far from Folwell school in So Mpls in the ‘60s-70’s. I could and did walk there. Very cool deco, sound. Real butter if I remember right. Reminds me of the Apache in NE mpls / Columbia Heights – thick glass, marble, thick carpets.. my fave as a kid.. cartoons, kid’s matinees, Disney.