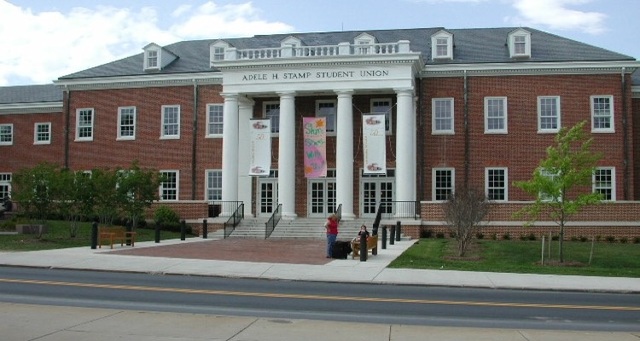 The Hoff Theater is located in the Adele H. Stamp Student Union at the University of Maryland campus. It opened in 1972 with a seating capacity of 713.

Catering mainly to the student population, the cinema is also open to the general public. It was refurbished in fall of 2002.

Due to falling attendances caused by the boom in multiplex cinemas, it was announced in September 2009 that the Hoff Theater would be closing in January 2010.

This theatre has a large stage and a nice lighting rig. Its capacity was reduced when the entire Stamp Union building was renovated starting in 1999; the last few rows were replaced by a concession stand and spotlight niche. It is equipped for digital projection and sound.

Most Hoff events are open to current UMCP students only. Notable exceptions include performances by Satanic Mechanics, the school’s “Rocky Horror” cast.

The Hoff used to advertise in the local papers. The ads were forced to stop when management of another theatre in the area accused the Hoff of putting them out of business.

The theatre also made the news last year when a student group attempted to screen an adult film, prompting a considerable amount of outrage.

The Hoff is NOT closing altogether…it will still be used for special events and some film screenings (including Satanic Mechanics shows). That’s great as this is a really nice theatre.