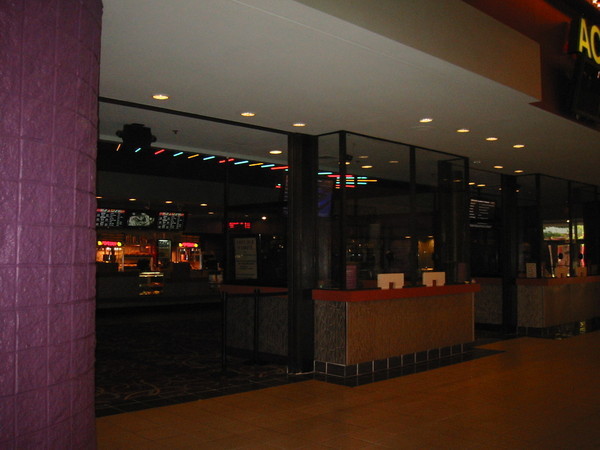 Located at Beltway Plaza in Greenbelt, Maryland the Academy 6 was originally opened in the 1970’s. AMC added the Academy 8 at Center Court in the mid-1980’s and the two locations were operated as the AMC Academy 14.

After AMC closed the Academy 8 it reopened shortly thereafter under Fox Theatres of Reading, PA. The location was soon remodeled with all houses featuring stadium seating. The remodeled location took the Academy Stadium Theaters name. It was taken back by AMC in January 2017.

My family attended a 5:05pm showing of “Alvin and the Chipmunks” in one of the 4 smaller theaters. I didn’t know that 5pm was the cut off of matinee prices. I always thought that 6pm was the cut off, but their prices are lower than the chains. There is freshly popped popcorn as you are welcomed by the waft of it as you pass the ticket booths.

The interiors haven’t changed since AMC opened this place up 22 years ago, except the stadium seating and Dolby Digital sound upgrades. When they first opened up this place, they had a 70mm booking of Top Gun that showed in two auditoriums of the four largest auditoriums. It was a great theatrical experience to hear and almost feel the roar of the jet fighters do their thing mated to the great score by Giorgio Moroder score and Kenny Loggins' title song. I wonder if they still have the same projectors there.

There was an annoying buzz like an old alarm clock alarm that eminated from one of the speakers at the top of #8 where we were. It came and went during the show. Another annoying detraction is the lack of proper sound insulation between the theaters. You could hear the other auditoriums soundtrack at various times during the movie. Not a good thing.

Lastly, their Customer Service Email address is either not accepting email or its closed.

If I am correct, these were popular for their weekend late night shows of Dawn of the Dead and Rocky horror picture show in the 80’s. I think this was the place – they would start the pictures around midnight and usually there were pretty many people in the audience, at least when I saw Dawn in like 1983.

“Rocky Horror” played there twice: 1981-87, and 1988-90. During the second run it was in the smallest of the “Academy 6” screens. The cast spent most of its time at the show in Glen Burnie, despite the fact that AMC had a brand-new print with the then-rare “Superheroes” sequence. (“Superheroes” became standard on 35mm prints in the mid-1990s.)

AMC dropped “Rocky” for good in September 1990 – a month before the movie’s 15th anniversary and video release promotions – after an alleged shooting during the show.

the mall itself screams ‘80’s as well – I can see the appeal and feel why 'Dawn of the Dead’ would be an ideal place to see that here. As to the theaters themselves – the stadium seating is decent, even if the last row is way too close to the projection window – thank you kind clueless stranger for blocking the image at one point during the movie (‘It Follows’). Pretty good sound, although the comedy ‘Get Hard’s noisier bits/bass could be heard rumbling from the adjacent auditorium.

I believe this place opened in the 70s. I remember when this shopping place was an outdoor plaza, much like PG Plaza and Wheaton Plaza were all outdoor shopping centers that eventually were remodeled to be indoor mall-type places.

What happened to the Academy 6 listing and there was a single screen venue outside of the Plaza that was here. It was here, then it disappeared, then reappeared. Now its gone, like most of my pre-2K5 postings. :(

It appears AMC has bought this theater back and is running it once again. The AMC website indicates upgrades are coming. With the Rivertowne also back in AMC hands, it all feels like deja vu mid-1980s. :) I’m curious as to why AMC is now having interest in its older divested properties.

Having not been in the bigger theaters since the 1980s, I recall AMC touting curved-like screens called Curvus in them. I am curious to know if they’re still there.

To add to my memories of the place, I remember watching Poltergeist II, in 1986, in one of the bigger auditoriums…probably the same one I saw Top Gun in 70mm. I think the sound format was Dolby Spectral and 35mm. The FX were by Boss Films, done in 65mm. When Carrie Ann ‘crosses over’ her voice is heard all over the place, which was cool. The stop motion of the creature at the end reminded me of the Alien Queen in Aliens in the long shots. Not very scary or original upon viewing.

I believe the last movie I saw in the bigger auditorium was The Bodyguard in ‘92. Nothing remarkable on a technical level. It was pre-digital, no 70mm, BUT to see Whitney Houston in her prime and perform songs on widescreen film was memorable. When the movie goes from present time to the song numbers, the auditorium would fill up with THE VOICE in all its strength and vocal perfection. The Queen of the Night Number at the club scene and the surround noises of the crowd and the instrumental tracks..terrific. The same can be said of the other songs on the track. Listening to the late Whitney Houston’s voice in a movie, probably projected and at the optimum sound level is a theatrical experience, itself.

Interesting to see these pictures of the theater. I worked there from June 1987 to January 1988 as an usher. It was the absolute best job I’ve ever had. While I was working there, we never referred to the theater as the AMC Academy 14 though. The 6 called themselves Academy 6 and we at the 8, called ourselves the Academy 8. There was very little interaction between the two theaters.

I must have had my notification turned off otherwise I would have responded sooner. Scott, thanks for the correction.

Kevin, the Academy 6 is where I saw my first movie with the family. My oldest brother talked my conservative parents to see a movie in a theater and we saw Rocky. I remember waiting in line to go in but hearing the sound from Star Wars and audience cheering and clapping. I begged to go see Star Wars..almost crying, but Rocky it was. In spite of the shoebox, tunnel-like, sloping auditorium the concept of the movie going experience and theatrical immersion got its start in me. :)

They need to put up the Academy 6 page. It was up, then down, then up, then gone. Memory fades with age. I used to attend many midnight and Wednesday dollar movie shows back in the day.