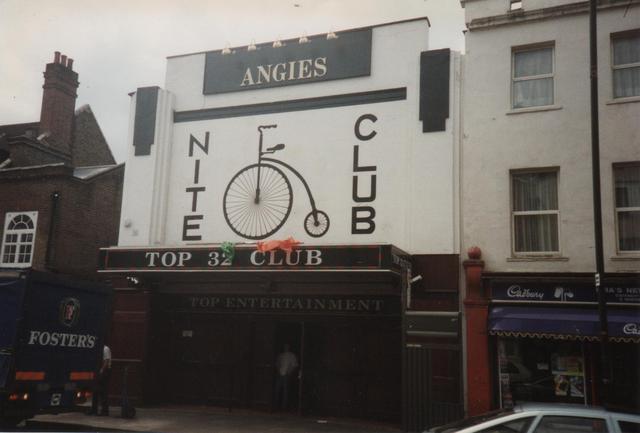 Located in the west London inner city district of Harlesden. The Harlesden Cinema Theatre was opened in December 1911. It had several unusual features, one being the cinema was a ‘reverse’ cinema, with the screen at the entrance end of the building. Another feature was the shape of the auditorium, which was built with a slight bend. All seating was on a single floor.

It was sold in 1921, and was re-opened in 1928 as the Grand Cinema. Around 1930, it was equipped for talkies and due to the position of the screen against the front wall of the building, the speakers were located behind grilles on each side of the proscenium. The cinema was also refurbished, which included a new Art Deco style facade. It was re-named Picardy Cinema in 1935.

The Picardy Theatre was closed on 19th October 1957 with Anthony Quinn in “Attilla the Hun” and Gary Cooper in “Good Sam”. It was converted into an Irish dancehall. Later became a nightclub known as Top 32 Club and Angies Nite Club. Its last use was as a snooker club. It was demolished in April/May 2003. In 2008, a new building on the site contains a Paddy Power Bookmakers at street level, with flats above.

A 1942 advertisement for the Picardy Cinema:
View link

The lovely old song from the music hall days suddenly came to mind when I saw the listing (and spelling) of this cinema.
Sorry, I cannot remember who actually made “ROSES OF PICARDY” so popular.