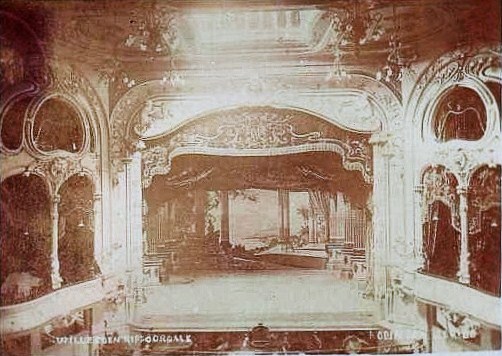 The Willesden Empire Hippodrome Theatre was confusingly located in Harlesden, although it was not too far from Willesden Junction Railway Station in this west London inner city district. It was opened by Walter Gibbons as a music hall/variety theatre in September 1907. In 1908, the name was shortened to Willesden Hippodrome Theatre.

Designed by noted theatre architect Frank Matcham, seating was provided for 864 in the orchestra stalls and pit, 517 in the circle and 602 in the gallery. It had a 40 feet wide proscenium, a 30 feet deep stage and eight dressing rooms.

It was taken over by Sydney Bernstein’s Granada Theatres Ltd. chain from 3rd September 1927 and after some reconstruction was re-opened on 12th September 1927 with a programme policy of cine/variety. From March 1928 it was managed by the Denman/Gaumont group, but was not successful and went back to live theatre use from 28th January 1929.

It was closed in May 1930, and was taken over by Associated British Cinemas(ABC) in August 1930. Now running films only it operated as a cinema until September 1938. It then re-opened as a music hall/variety theatre, with films shown on Sundays, when live performances were prohibited.

The Willesden Hippodrome Theatre was destroyed by German bombs in August/September 1940. The remains of the building stood on the High Street for many years, becoming an unofficial playground for local children, who trespassed onto the property. The remains were demolished in 1957. In the 1960’s an office block was built on the site. Known as Harlesden House, it originally served as a Government Labour Exchange now a Job Centre Plus.

OH! THOSE WERE THE DAYS… I DO REMEMBER PLAYING ON THE ABOVE BOMBED SITE MYSELF….I REMEMBER THAT I WAS SWINGING ON RATHER A LARGE CHAIN ABOVE THE STAGE.. I THINK IT WAS WHAT WAS USED TO RAISE THE CURTAIN.. AS I WAS SWINGING I SLIPPED AND SUSTAINED A CUT TO MY UPPER ARM, AND A GOOD TELLING OFF FROM MY MOTHER…ANYONE ELSE THAT USED TO VISIT THIS SITE, WOULD YOU MIND REPLYING PLEASE… ESPECIALLY IF YOU USED TO PLAY ON THIS BOMBED SITE… MY NAME IS AUDREY WEST { WAS ROBERTS} AND IT WAS IN THE EARLY 50S MAYBE YOU KNOW ME…..

Hiya Audrey, Ken Morris here. I’m sure you must remember my family – Vi and Fred Morris, older sisters Jean and Barbara, me and my younger brother Brian. I was quite suprised to see your name on here and thought I’d say hello. I see you are interested in the old theatre too. I would love to get some photos of it. I have one, but nothing of the bombsite. It is very disappointing to see all the cinemas closing down. Harlesden alone has lost two (Picardy and Colliseum). I think the odeon went too. There is nothing like watching a film in a proper cinema, mainly for atmosphere. Oh well! I lost touch with everyone in Rucklidge Avenue once we moved away. How about you. Would love to hear from you. Best wishes Ken Morris

Hi all I lived in Nightingale Rd. and remember the bomb site well especially the threepeny bit hole. My grandparents used to live at the cottage 177, Harrow Rd in the 1920’s and used to provide lodgings for the music hall stars. Has anyone got any programmes from this old theatre ? Roy