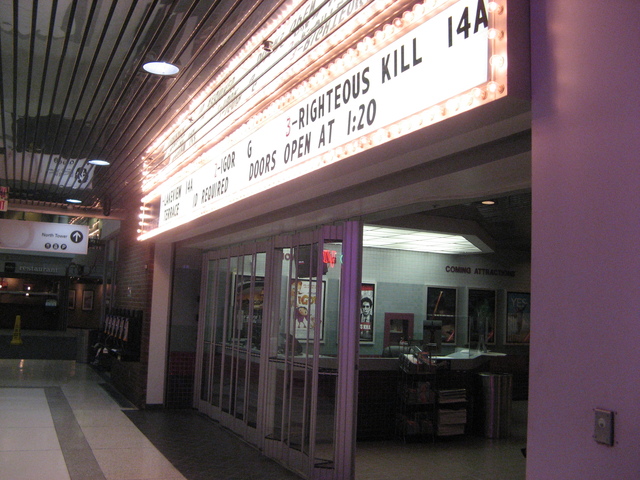 Opened on May 22, 1985, Oakridge Cinemas was Canada’s first THX certified movie theater. Built inside a mall within the confines of approximately 18,000 square feet, Oakridge is capable of seating over 1,120 guests between three auditoriums.

The theater is largely unchanged from its opening, save for three large renovations: the box office was moved from the south corner of the mall-side entrance to the north corner, the balcony concession stand was demolished, and the carpet was replaced after 5 years. The original marquee signs, seats, screen curtains and paint scheme are all in tact for the most part. All three auditoriums have gone through minor changes, most notably to accomodate wheelchair seating as this has resulted in the removal of seats. Currently auditoriums one, two and three seat approximately 620, 252 and 253 patrons respectively.

Oakridge’s most unique feature is inside auditorium one. Boasting over 110 seats, auditorium one’s impressive balcony extends out over a third of the lower orchestra. Featuring tiered seating where the rest of the complex is designed with sloped floors, the balcony is only accessible from the main entrance level of the theater.

Outside of holidays, school-breaks and the long summer season, Oakridge Cinemas operates as a night house on the week days. Business levels are moderate, and generally this theater does not sell out.

The Oakridge Cinemas were closed on January 2, 2012.

Empire Oakridge 3 will be closing on January 2nd, 2012 as the mall is redeveloping. A Crate & Barrel store will be going in its place. Very sad news as the theater certainly has its history.

What a shame. Looks like a great theatre, several photos of it on cinematour.com

It certainly was! Saw my last movie there, SHERLOCK HOLMES 2 about a week ago, and the sound and projection are among the best in the city. Cinema #1, with the balcony and huge capacity (between 620-640) made it a really great place to watch a movie. The theater was doing pretty good business but you can’t stop progress, I suppose, as Oakridge mall really wants to update. I took even more photos recently and will be sending those into Cinematour next week.

Status should now be closed. Tear.

Added a large amount of VERY old photos I took back in 2010 and 2011, the last two years of this complex in operation. Apologies for the low quality of the photos as they were all taken with a low-resolution pocket digital camera, but it’s better to have poor quality photos than none at all, I suppose!