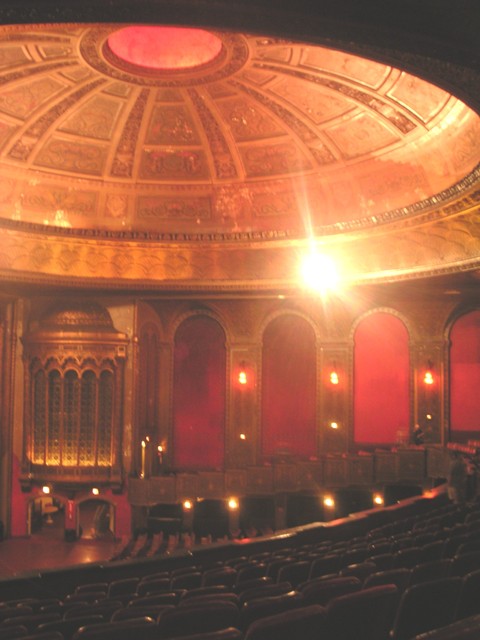 A mix of architectural styles (including Adam and Italian Baroque), this theater has an elaborate large domed auditorium and is covered with decorations in stone, terra-cotta, and plaster. It remains remarkably intact, down to the original light fixtures and marble wainscoting.

In the 1970’s, the Congress Theater was renamed Teatro Azteca, and screened Spanish-language films. Movies continued to be shown through the 1980’s when it was known as the Vincente Fernandez Theatre. By the 1990’s, the theater hosted live Latin acts, boxing matches, and an occasional film.

In 2000, the theater was threatened by demolition (for proposed condominiums), but the neighborhood rallied to the its defence. On July 10, 2002, the Congress Theater was declared a Chicago City Landmark.

This splendid survivor of the movie palace era functioned as one of Chicago’s grandest concert venues, and was closed for refurbishment in 2013. In January 2018 the Congress Theater was added to the National Register of Historic Places. In early-2020 work on the renovation/restoration of the theatre was halted, but restarted in May 2021.

An update on that last story is not very positive: https://blockclubchicago.org/2020/02/27/is-the-congress-theater-restoration-still-happening-its-an-eyesore-neighbors-say-as-delays-drag-on/?mc_cid=ab6a6215e8&mc_eid=11e184853b

Another update that is not very positive…

that seems to be an update on an outdoor fountain.

Ha, right your are. Here is the real update on the update.

Venue was renamed the Vicente Fernandez Theatre in the late ‘80s. Chicagopedia group on Facebook has ads from 1988 (Stand and Deliver in Spanish) and '89 (Leonard-Duran III bout on closed-circuit) billing it as such.

Was over that way the other day. Didn’t seem like there was any activity.