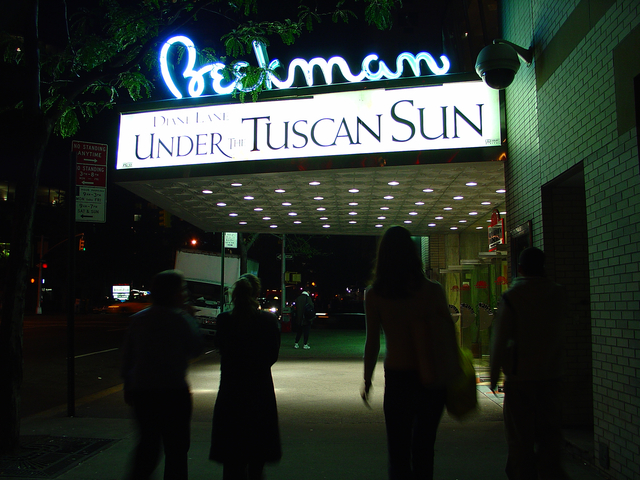 The Beekman Theatre, located on Manhattan’s Upper East Side, was a single-screen ‘art house’ movie house which drew large audiences ever since it opened on April 28, 1952 with Vittorio Manunta in “Never Take No for an Answer”. It was built for the Rugoff & Becker chain.

The theatre’s exterior (including its signature marquee, with its name in cursive-style) was modern but stylish. Inside, the Beekman Theatre featured high-backed plush seats, rich carpeting, and wood-panelled walls.

The audience entered the auditorium from the side, in between two levels of seating. This seating layout, similar to the Ziegfeld Theatre, was the true precursor of stadium-style seating.

Until the end, the theatre opened and closed the curtains before the beginning of every film. Films buffs will recognize the Beekman’s cameo in the Woody Allen film “Annie Hall”.

The historic Beekman Theatre closed on June23, 2005 with “The Interpreter” being the final film shown on its screen, after its landlord, Memorial Sloan-Kettering Cancer Center, decided not to renew Clearview Cinemas' lease.

We are definitely declining when it comes to taste and education about the arts and the past. While the video-game junk decor serves a purpose, it woud still be wonderful to see a multplex constructed to resemble the great movie palaces that are mostly lost…even if this construction were limited to the lobby and foyer areas. Imagine a new multiplex with a foyer like the landmarked foyer of the RKO Flushing, or a trim, sleek art deco/art moderne lobby like the Beekman’s original interior. Cost, cost, cost will be the objection to creating such a showplace. I am sure there would be ways around high costs…for example, a contest for the creation of a showplace lobby or foyer for a multiplex, the competitors being architecture and art students from local colleges and universities who would create a permanent grand space in return for college credit, or a smaller fee than an established firm would charge. However, the results might be lost on current generations who do not have appreciation for arts or history. Also, builders of multiplexes would not want a grand permanent interior because of the expense of maintaining it, demolishing it, or future battles over landmarking. It is easier and cheaper to build for obsolescence. SIGH

I remember the Beekman very well. What a wonderful theatre. I went there to see most of the Ingmar Bergman movies. The first was Wild Strawberries. I, and a few others, had arrived late to attend a concert at Lewisohn Stadium, and it had started raining. So we went to the Beekman instead. On other occasions, I saw Through a Glass Darkly and Winter Light – two of the Bergman classics.

Unfortunately I’ve never seen a film in the lovely old Beekman, but I recently acquired a beautiful marquee from the Beekman for Woody Allen’s “The Purple Rose of Cairo” (03/85). It is silkscreened on lucite.

Does anyone know where I can find a photo of the Beekman from March, 1985 showing the Purple Rose marquee? I can’t seem to find one anywhere.

I miss the old Beekman. I have lived nearby for over 30 yrs. & it was always a nice surprise to see it utilized for all kind of premieres since it was such a beautiful showcase theater. The owner would speak before screenings to chastise those who had maybe brought in their own soda or snacks. One little thing I noticed is that even up to the end, their presentation of movie posters would always feature that little extra…cutting away part & raising it with foam core board so as to create depth & enhanced visual interest. Does any theater care enough to do that kind of thing anymore?

Yes, Garyw, I don’t know about the speeches but all the ‘art houses’ had those foam core displays back then. It seemed to matter. To some of us.

I saw Stealing Beauty and The Dreamers at the Beekman when they were issued. https://variety.com/2018/film/global/bernardo-bertolucci-dead-dies-director-the-last-emperor-1203036077/

I wish I had gone to the Beekman more, as it was one of the most beautiful theaters in Manhattan in the 80s/90s. When I was in college, I dated a guy named Gary whose brother worked for Cineplex Odeon and he would get our names put at the box office to see free movies, as long as it wasn’t opening weekend. We saw a few things at the Beekman, though the only one I remember was a terrible movie with Molly Ringwald and Robert Lindsay from 1990.

Didn’t go there much at all in the next decade, but it was actually the last movie theater I ever went to in NYC. A week or so before I moved to LA, I went to see Almost Famous for the 2nd time. I was really happy I got to spend one more movie there.