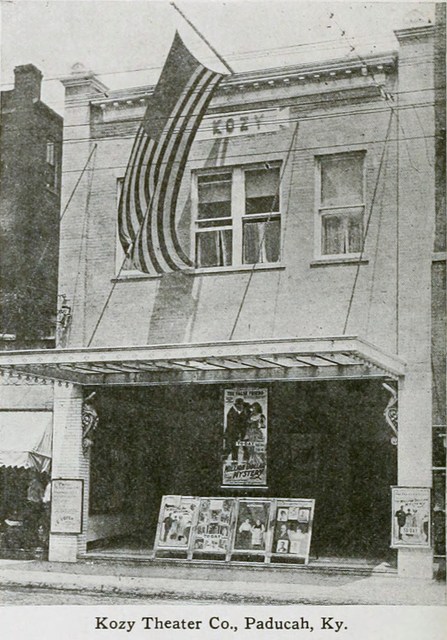 The Rialto Theatre was operated by the Keiler family’s Columbia Amement Company, and they had also operated an Orpheum Theatre in Paducah, as well as the Arcade Theatre, Columbia Theatre and the Kentucky Theatre.

The Rialto Theatre was closed on October 24, 1954 with Dorothy McGuire in “The Enchanted Cottage”.

The Rialto has been demolished. It was located on the north side of the 400 block of Broadway Street, about mid-block. The site is now occupied by one end of a modern, two-story building housing an outfit called Four Rivers Behavioral Health.

The historic buildings to the east of the Rialto’s site are all still standing, though some have been considerably altered from the year (I’d guess around 1952) when this photo of Broadway Street, with the Rialto’s marquee at far left, appeared in Life magazine.

Given this theater’s location in the 400 block of Broadway Street, I’m almost certain that Rialto was a new name for the Kozy Theatre, which was operating in the 1910s.

In the 1910s, Paducah also had a house called the Star Theatre, at 426 Broadway Street, almost across the street from the Kozy.

Here is information about the Kozy Theatre from the April 11, 1914, issue of The Moving Picture World:

“Rodney C. Davis and Rankin Kirkland, of Paducah, are having plans made by A. L. Lassiter & Brothers for a new moving picture house to be known as the Kozy Theater. The new house will he at 417 Broadway. The building will be two stories high, and constructed of white enamel, and ‘Hytex’ brick. The seating capacity will be five hundred. The vestibule, which will be sixteen feet in length, will have a mosaic floor. The auditorium will be 92.6 feet in length, and the flooring will be of concrete, covered with wood and battleship linoleum.”

Chuck, Leo Keiler (the more frequent spelling I’ve found for his surname) was a partner in the Strand Amusement Company, at least as of 1921 and in 1929. Here’s an article about a partnership formed with the Switlow interests of Louisville, which appeared in The Film Daily of January 21, 1921:

“Louisville — Col. Fred Levy, holder of the Associated First National Franchise for Kentucky, and Leo Keiler of Paducah, who control a chain of 19 theaters in Kentucky through the Strand Amusement Co., have completed negotiations for an affiliation with M. Switow in the ownership of three theaters here. Included in the deal is the new $200,000 theater erected by Switow on 4th St., directly across the street from the new Rialto. The Parkland and another neighborhood house are the others.

“The other theaters owned by Switow — two in Jeffersonville, three in New Albany, one in Bedford, Ind., and one in Salem, Ind., are not included in the deal.

“Among the properties operated by the Strand Co. are four in Louisville, in addition to the three secured through the Switow alliance, four in Paducah, three in Mayfield, three in Owensboro, one in Irvine and one in Princeton.”An article in the same publication the following year noted that Leo Keiler and Harry Switow jointly oversaw construction of the new Columbia Theatre in Paducah.

The Sunday, June 15, 1930, issue of The Film Daily had an article about a pending deal between the Strand Amusement Co. and Warner Bros.:

“Louisville, Ky. — Deal for acquisition of the 16 houses in the Strand Amusement Co. by Warners is understood to be near stages of completion. Leo Keiler and Fred Levy, officers of the company, are said to be ready to turn over the houses as soon as terms are agreed upon. Keiler has three houses in Paducah which will most likely be included in the deal.”Find a Grave has Leo Keiler’s obituary, and it confirms that Keiler and Levy sold their theater buisness to Warners. The Keiler family apparently retained at least part ownership of at least some the the theater buildings, though, through the Columbia Amusement and Realty Company, which had been formed in 1923. Strand Amusements must have leased the buildings from Columbia, which owned the Arcade, the Orpheum (formerly the Opera House) and the Columbia itself.

The Kozy Theatre is mentioned in the October 24, 1908 issue of The Billboard, along with the Star Theatre (also a movie house) and a vaudeville house called the Paducah Theatre.