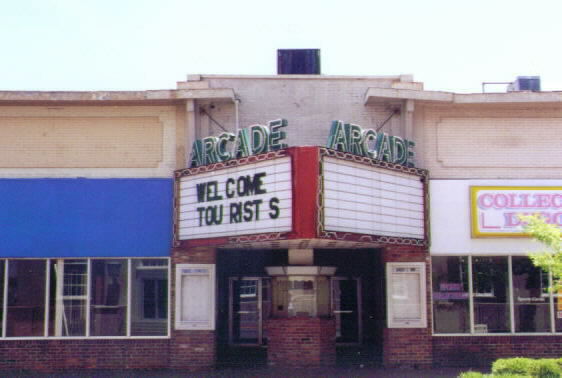 The Arcade Theatre opened on November 6, 1911 and was the first theatre in Paducah built primarily for movies. The larger and more ornate Columbia Theatre (which has its own page on Cinema Treasures) was later built next to the Arcade Theatre. A second screen was opened February 7, 1986.

http://www.kfvs12.com/Global/story.asp?S=6693329
Old arcade building to be revamped
By: Erica Byfield
By: Erica Byfield KVFS Channel 12 News June 21, 2007
PADUCAH, Ky. – It’s not often that we get to take a step back in time, but that’s exactly what we did Thursday.

We took an exclusive tour of the old arcade building in downtown Paducah with an investor that wants to bring some life back to it.

Sharon Graves can’t help but get excited, “It will be very dramatic to see all that cleaned up.”

She’s poured a lot of energy into this project.

“When I see the potential in this building it would be great place to work,” Graves said.

She explained plans to gut Paducah’s old arcade theater, built in 1911, in an exclusive tour.

Stage one, overhaul the front part of the building into retail and office space and then fix up the old theatre into more work space.

“We’ll just build from the inside and where going to put windows on the back,” she said.

If the Paducah City Commission approves Sharon Graves' proposal to buy the property, she says she hopes to sell off all the artifacts inside here… including the theatre seating, speakers… you name it… and she hopes it all goes to a local charity.

“It’s going to still be the same building but once it’s all painted the same color and new windows… it’s going to pop again.”

Sharon Graves adds she has an extra incentive to paint and rebuild this landmark.

“I’ve had so many people tell me that when they were little they could come here to the theatre” she said.

It won’t happen overnight, but Graves is sure once it’s done the old arcade will once again be the talk of the town.

Sharon Graves still needs approval by the Paducah City Commission before she can start renovating the old arcade building.

the Arcade is described as having closed in the 1980’s.
From: http://www.paducahmainstreet.com/theater.htm (which has a vintage photo):
The Arcade has been multiple uses including the theatre, offices, restaurants, offices, and retail stores.

The Arcade Theatre building is approximately 19,250 square feet. Parts of this structure are currently being used as offices, a retail store, and a barbershop.

Here is a view of the Arcade on the left and Columbia on the right:
http://tinyurl.com/2b7uah

The Arcade Theatre’s auditorium can be seen behind the entrance building, on S. Fifth Street. It has been listed on LoopNet, though it is currently off the market. The auditorium has been entirely gutted.

The 2nd screen opened on February 7th, 1986, the same day as the opening of the Kentucky Oaks 10 cinemas.