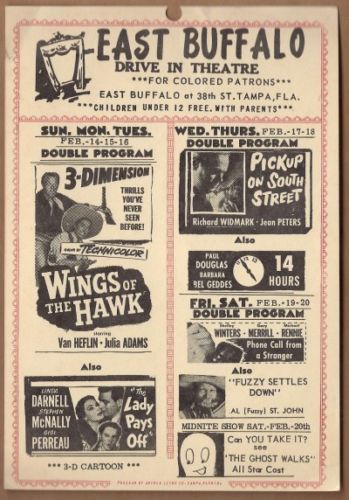 The Buffalo Drive-In was built by Dale Elleman in 1954 and was for African-Americans only. It was still open in 1957. No trace of it remains.

Here a little information from someone who’s familiar with these three drive-ins. Hopefully this will clear up at least some of the mystery. According to a friend who was a former projectionist (and who worked for 3 years at one of these drive-ins) these three drive-ins were located in fairly close proximity to each other. I don’t have the physical addresses for each but the names were Columbus, 40th Street, and East Buffalo.

Glad you are back on Nick.You have a comment on your Castle Comments about his Movies he made in the 50’s,might want to check it out if you already haven’t.hope everything is okay.

Aerial from 1957. Lot was narrow but long:
View link

In contrast with the 1957 aerial above here’s an aerial showing what the property looks like today:
View link

thanks again Nick,you and a few other members add so much enjoyment to CT.

A second photo has been added showing a handbill that does indeed show that the theatre was segregated at some point during its existence.

In researching the DI’s in the Bellefontaine, Ohio area that were built by Dale Elleman. He is listed has operating the Buffalo DI in Tampa, FL. I would think it is the same DI has the East Buffalo. Per the 1955-56 Theatre Catalog