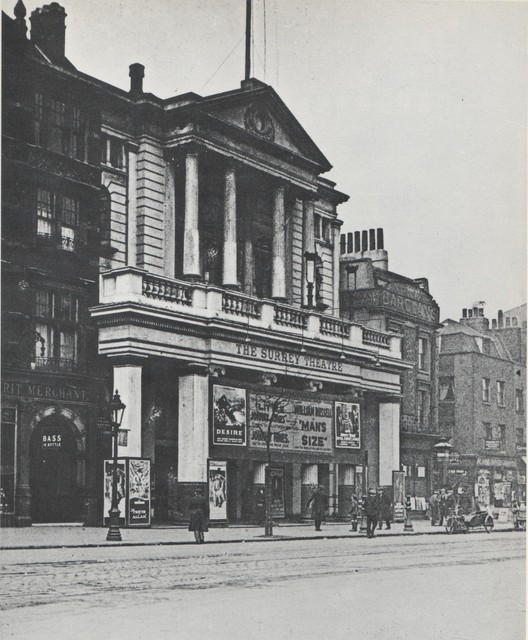 Located on the southern end of Blackfriars Road at St. George’s Circus, just south of the River Thames in Southwark, southeast London. This was the third theatre built on the site. The first opened in 1782 as the Royal Circus, which burnt down in 1805. The second theatre was opened in 1805 as the Royal Surrey Theatre, and burnt down on 30th January 1865.

It staged dramas and pantomimes, and it was at one of these that Dan Leno made his first London appearance. In September 1902, it was taken over by the MacNaghten Vaudeville Circuit. In 1904, it was re-modeled by architects Kirk & Kirk and became the Surrey Theatre of Varieties.

Known as the Surrey Theatre in the early-1920’s, it was converted into a full-time cinema. This use only lasted a couple of years and the Surrey Theatre closed in 1924. The building stood empty and unused for several years. In September 1932, it was purchased by a new owner and proposals were made for it to re-open, but this never happened. In July 1934, it was ‘For Sale’ again, and was purchased by the Royal Eye Hospital. It was demolished in 1934 to build an extension to the hospital. This too has now been demolished and today a modern block of flats stands on the site.

More history, and images of the Surrey Theatre:
http://www.arthurlloyd.co.uk/surrey.htm