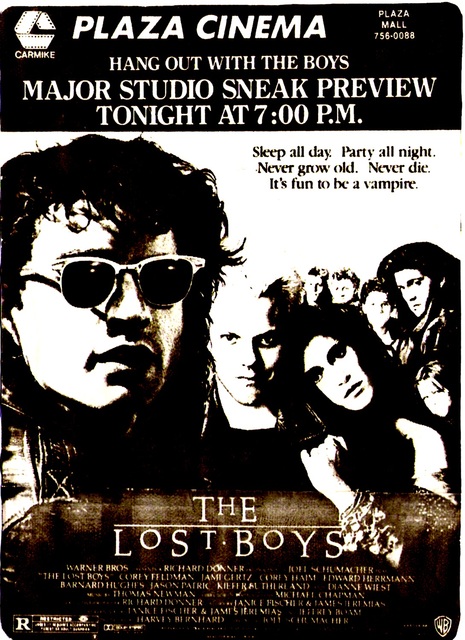 It was known as the Plaza Cinema and it became Greenville’s first-ever suburban theatre that was an alternative to the downtown moviehouses (the Park Theatre and the Plitt Theatre), and was located in the Pitt Plaza Shopping Center on Greenville Boulevard. The Plaza Cinema under Charlotte-based Stewart and Everett Theatres opened on August 26, 1968 as a 530-seat single screen theatre with Jack Lemmon and Walter Matthau in “The Odd Couple”. The Plaza Cinema had the same architectural design as other cinemas that Stewart and Everett were building across eastern North Carolina.

By 1986, Carmike Cinemas began acquiring this theatre after its acquisition of Stewart and Everett, and it was renamed Plaza Cinema 3. Carmike closed the Plaza Cinema 3 on August 6, 1998, after more than 30 years serving the greater Greenville area.

George Lucas' STAR WARS played here when it the Plaza was a twin cinema. It played here on July 8, 1977 and it played here for an astounding six weeks,aka The Plaza Cinema 1 & 2.

I was the first projectionist & aprentice equipment installation technician when this theatre opened. The auditorium had 530 seats of which several rows of seating on rear left & right were equiped with ash trays. This was a prolific tobacco growing region. The projection room was equiped with dual “Century” 35mm projectors, “Westrex” 4 Track magnetic sound system. 2000' film magazines and “Strong” Futura I Angular trim carbon arc lamps. If my memory serves me, we opened with “The Odd Couple” I also remember running serveral 4 track prints such as “How The West Was Won”, “Woodstock”, “War And Peace”. Can also remember the interesting smells during the “Woodstock” engagement,don’t think it was tobacco!

I attended one of the last shows at this theatre in 1998, “There’s Something About Mary”. The ceiling tiles in the auditorium were dangling from the ceiling, as if they were about to fall to the floor. The Plaza Cinema 3 had long been Greenville’s most dilapidated movie house (even more so than the downtown “$1.50 grinder” the Park Theatre, also a Carmike theatre. Carmike owned all of Greenville’s cinemas at this time, including the Plaza, Park, Carolina East 4 and Buccaneer 3. The then-new Carmike 12 was running a “preview night” on the same night that I went to see one last show at the Plaza.The next night the Carmike 12 officially opened as a first-run theatre (preview night was second-run films) and the Plaza closed forever. The Plaza Cinema was demolished sometime around 2001,and the lot (behind JCPenney) remains empty.

The Plaza Cinema 3 was the only first-run theater in Greenville to show Troma films, including “The Toxic Avenger” and “Surf Nazis Must Die”. Both Stewart & Everett and Carmike advertised the Troma films (as well as mainstream films) on the radio; no other theater chain in Eastern North Carolina advertised regularly on the radio at this time (the 1980s). The Plaza Cinema was the primary showcase in Greenville for “sleazy” (but not porno) movies; the Plitt Quad seemed to avoid low-budget exploitation films and the Buccaneer 3 showed them very infrequently. The Plaza Cinema showed non-Troma “sleaze” films as well; “Reform School Girls” (starring Wendy O. Williams of the punk-rock band The Plasmatics) played here under S&E. Carmike stopped booking Troma fims in Greenville (and eventually stopped showing exploitation films in general) after 1990. The last Troma film released theatrically in Greenville was “Def by Temptation” in 1990; it played first-run downtown at the Park Theatre (which charged its normal $1.50 “all shows” admission).

THE PLAZA THEATRE under Stewart and Everett opened on August 26,1968 as a 530-seat single screen theatre with Walter Matthau and Jack Lemmon in Neil Simon’s “THE ODD COUPLE”…..basically the cinema had the same architectural design as the Parkwood Theatre in Wilson which opened the same year as this one. Was twinned in 1975 as the PLAZA CINEMA 1 & 2 with a second auditorium added on to the original auditorium with 325 seats,making the total to 855. By late-1977 or early-1978 it expanded to three screens renamed the PLAZA CINEMA 1-2-3 under Stewart and Everett where the original auditorium was carved into two sections keeping the second auditorium intact for bigger presentations adding on 340 seats making the total seating capacity of 1,195 seats. Carmike Cinemas acquired the PLAZA TRIPLE THEATRES in 1986 after it’s acquisition of Stewart and Everett.

raysson:
In case you need to make necessary corrections,let me remind you that the PLAZA THEATRE or the PLAZA CINEMA was NEVER EVER an ULTRAVISION theatre! This needs to be seriously corrected!!!

For the record….the only ULTRAVISION that was East of Raleigh was in Jacksonville for the Cardinal Theatre and just to let you know Greenville NEVER EVER had an ULTRAVISION theatre in that city!!!!

A Mellow Mushroom pizza restaurant is now located on the site of the Plaza Cinema 3 (the final name of this theater). Despite the official address of 714 Greenville Boulevard SE, it was actually located on Charles Boulevard at the entrance to the JCPenney parking lot (where Mellow Mushroom is now).