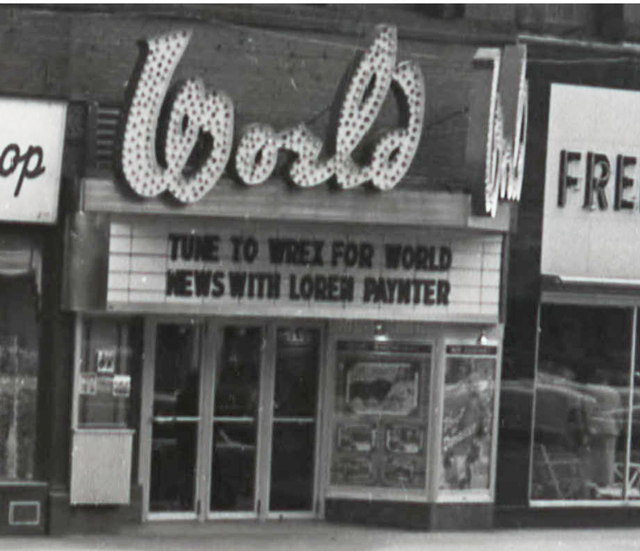 The Lake Theatre was a small downtown theatre that opened in 1935. Seating listed at 245. It was renamed World Theatre in July 1950. It was closed in June 1956.

It is now used for retail.

The Lake Theatre was located in one of the store fronts of the Hayes Building, which was originally owned by Rutherford B. Hayes. As told on this web page about Duluth’s smaller movie theaters, the space was occupied by a theater called the Savoy during the silent era. The house reopened as the Lake Theatre from 1935 to 1950, and then became the World Theatre until 1956.

The Hayes Building and the adjacent Weiland Building have been renovated as part of a mixed-use project covering almost a full block of downtown Duluth, but I’m not sure how much of the original structures remain. This web page describes the extent of the project. It sounds like the original walls are intact, but that the interior of the building has been largely rebuilt. There is probably no trace of the theater remaining.

The Lake Theatre was operated by the Blackmore Bros. (also ran the Granada and other early theatres) until it was sold in 1948 to John J. Rogus. In November 1949 the theatre was shut down for operating without a license. The crackdown came after complaints of showing “lewd and indecent pictures.” Manager Bert G. Langley and owner Ray Lumsden were arrested. The case didn’t stick, and in March 1950 Langley was awarded $1050 in damages for false arrest. The Duluth News Tribune defended the theatre operators and questioned the actions of the police. (Sources: Greater Amusements, 3-24-50; Variety 3-29-50; Motion Picture Herald 4-1-50). In July 1950 new ownership took over the theatre, renamed it the World. It had been closed a few months (since the November arrest?). The new operators were Minneapolis-based film bookers including Ralph Pielow and Abbott Swartz. It was put up for sale again in March 1955 (source: Greater Amusements advertisement 3-25-55). The ad said “For sale, lease and equipment: 300 seats, good downtown location. CinemaScope. Low Overhead. Plays first run, first run moveover and 2nd run. Has grossed as low as $400 per week and as high as almost $4,000 per week.” Late in ‘55 the theatre reopened with “new staggered seating” and got two first runs, “Tennessee’s Partner” and “The Big Knife”. There would be a few more first runs, some of which were British films and other foreign product like “Monika”, but the theatre’s final closing came in June 1956.

Photo is probably from the early 1950s – on the marquee is an advertisement for the radio WREX, and its newsman Loren Paynter. WREX (1080 AM) went off the air around June 1953 when ownership pursued a television license in Duluth.