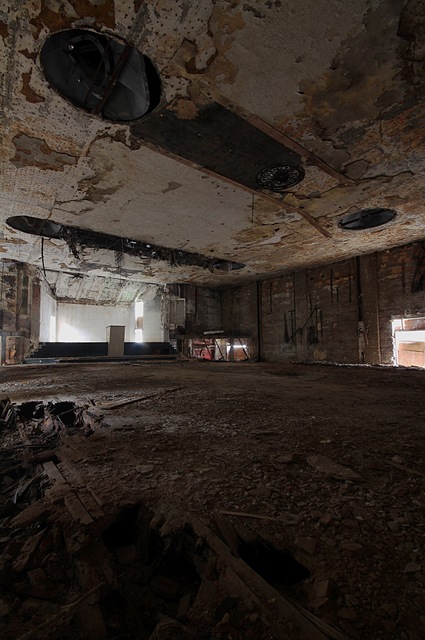 The 1,474-seat Imperial Theatre opened on September 13, 1913. All seating was on a single level. It was equipped with a Kimball 2 manual 11 ranks organ. By 1920, it was operated by Stanley-Warner Theatres, who remodeled in 1930. The Kimball organ was in use until the late-1930’s. The Imperial Theatre was closed by Warner Bros. Circuit Management Inc. on November 4, 1951 with Lawrence Tierney in “The Hoodlum” & Robert Montgomery in “Texas Rangers”. It was gutted internally the floor was levelled to become a catering hall, later operating as a roller skating rink. It was later used for storage.

The building still stands in 2019 but not in use, and is fast deteriorating.

Not as pretty as the IMPERIAL in Augusta.

All boarded up now, looks rather shabby. Interesting – the entrance is on one street, goes back and wraps to the right a little before connecting to the auditorium which is around the corner on another street. The buildings along the corner have been demolished so you can see the lobby wrapping around to the auditorium.

Hidden City Philadelphia includes a picture of the Imperial in a story on redevelopment along 60th Street.

The interior of the Imperial has been stripped to the bare walls.

Picture referred to above uploaded.

The Imperial Theatre had recently changed hands, according to this item in the July 1, 1916, issue of

“Philadelphia, Pa. — The large moving picture theater, the Imperial, located at Nos. 217-19 South Sixtieth street, has been purchased by Robert N. Wannemacher from Robert Bloomgarden, for a nominal consideration, subject to mortgages of $72,500. The theater measures 90 by 130 feet, and is reached by a lobby 32 by 72 feet. The new owner has made arrangements whereby William I. Greenfield, will manage the theater.”The April 4, 1953, issue of The Billboard said that the Imperial Theatre had been bought from Warner Bros. by sports promoter James Toppi, who intended to convert the house into a roller skating rink. Toppi had already converted the Alhambra Theatre, also formerly a Warner house, in South Philadelphia into a roller rink.

The auditorium was gutted and used as a warehouse after closing as a roller rink, according to this PDF documenting a 2003 proposal for renovation of the 60th Street commercial corridor. This project included plans to combine the Imperial and the adjacent buildings on the corner of Chancellor Street into a family recreation center which would include a restored roller skating rink in the theater’s auditorium.

The buildings on the corner have since been demolished, so some other plan must be developed, but so far the project remains in limbo. The Imperial’s building is apparently still standing, for now, but a close view of Google’s satellite photo shows greenery growing on the roof, a sure sign of advancing decay. The window of opportunity for salvaging this building will soon close.

I went by the Imperial theater and it is a little more than a ruin at this point. Though both the auditorium and lobby are still standing, they are so damaged that the walls are crumbling and falling away. It seems that the building was used as a church for a while, and in the transformation a large sheetrock wall was built halfway down the auditorium, perpendicular to the stage. The ceiling is falling down, and the walls are bare. A few ornamental chandelier medallions are still there but the original lighting fixtures are long gone. All of the seating was removed and the floors were thoroughly rotted. The projection room is as empty as the rest of the building. The bland lobby appears to be mostly original but was very unimpressive. At this point it’s either going to fall over or be demolished.

Ground breaking for Berman Brothers' Imperial Theatre took place on February 10, 1913. But during the building process, they sold out James J. Springer. The Imperial held its grand opening on September 13, 1913 with a mirror screen for brighter movie presentations. The theatre converted to sound but Stanley-Warner Circuit closed the Imperial permanently on November 4, 1951 with Lawrence Tierney in “The Hoodlum” and Robert Montgomery in “Texas Rangers.” Unable to find a new operator, the venue was auctioned off in June of 1952.