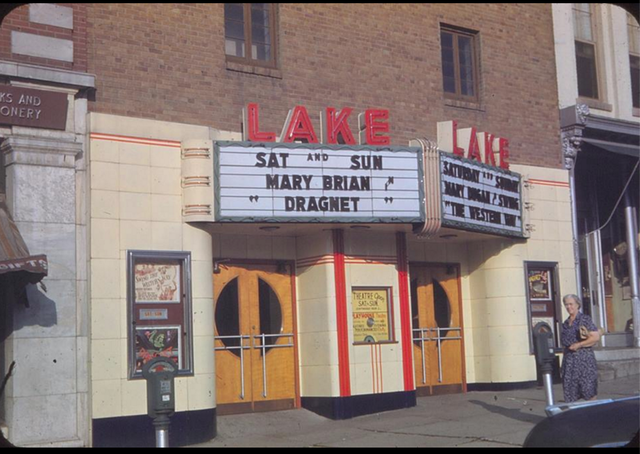 The New Theatre was opened in around 1941. It was built for the Schine Circuit. It was soon renamed Lake Theatre

Joe: Thanks for the update on this one though I hope to visit Canandaigua in the Finger Lake Region of NYS this summer to see this former theatre. I wonder what the “business use” entails?

Thanks again for this Boxoffice article with photos! Another theatre that should be with us!

I was in Canandaigua this past summer. Had I done my homework and realized that this town had a theatre designed by Michael DeAngelis I would have inquired about it and its location! A return trip is now in order!

If anyone knows…post what is at the former theatre main street location now. Thanks.

Hard to believe this theatre was closed in 1954. It should have never closed in this quaint lake village.

I have the plans for the remodeling of the Lake Theatre for the Schine Corp. Dated 8/7/1939. With Revisions shown dated 12/7/1939. Michael J. DeAngelis, Architect, 1600 Broadway, NYC, local office Temple Building, Rochester NY. The Lake Theatre building was owned by Mr. & Mrs. J.J. Soppe and Schine was the lessee according to the plans. The building was converted to a men’s clothing store after the theatre closed. The clothing store was Montesano’s and then became Dick Anthony Limited. Canandaigua National Bank was looking to expand the bank in the 1980’s and already owned the Lake building. They helped the clothing store to move to another location on lower Main Street and then demolished the Lake building and built a 3 story building matching the original 3 story building on the site in 1880. The buildings remain the main office for the bank. As a youngster in the 1960’s I remember my mother taking me there to shop and I remember all the art deco details in the store, the floor was leveled but all the interior of the theatre that was above the raised floor was visible. The entry was remodeled to add store windows. We acquired the plans when we cleaned out the Schine (then Country-Wide) Playhouse Theatre and found them in an office just before demolition by the same bank in the 1970’s.

Thank you for this information about the Lake….wish it were still with us. As quaint a town as Canandaigua is it should have a quaint and orginal theatre like it once had!

I visited this town a few summers ago and was disappointed to learn that the Lake is no longer in this quaint lake village.

I am sorry to say, but that is not a photo of the lake theatre in Canandaigua New York. The theatre was located on South Main Street between the Goodie Shop Soda Fountain and Canandaigua National Bank. Neither of those existing buildings are in the above photo. As I mentioned previously, I have the original plans for the lake theatre. The exterior was Art Deco with shiny black glass tile and brushed stainless steel decoration. I do have a photo of the facade somewhere and need to find it. The site shown on the page for the Playhouse theatre is incorrect. The theatre was located at the other end of the building shown. I will need to figure out how to post the plans of the lake on this site. They are large blue prints (actually blue!)

If the link holds, this page of Boxoffice, June 21, 1941, shows two photos of the Lake Theatre. The facade was plain brick above the marquee. The streamlined ground floor front looks like it was done in Vitrolite or one of the other glass tiles popular around that time. The building was much narrower than the theater in the photo we’re currently seeing at the top of our page, as can also be seen by the Boxoffice photo of the Lake’s auditorium. I don’t know the location of the Lake Theatre in the photo robboehm uploaded, but it wasn’t the Lake in Canandaigua.

The bank annex Estey_Struble_Theatrical mentioned as being on the site of the Lake Theatre has the address 60-70 above its door, so the theater’s address was probably about 64. The bank’s main office next door to the south is at 72 S. Main and the Renaissance Goodie II Shoppe next door to the north is at 56 S. Main. The theater should be listed as demolished, of course.