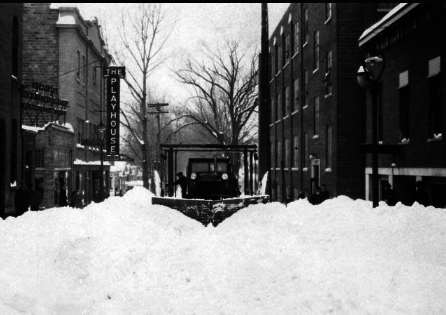 The book Around Canandaigua, by Nancy H. Yacci, a photo of the Playhouse. The movie on the marquee, One Stolen Night, staring Betty Bronson, was a 1929 release. The name Fox is above the marquee. An ad in a 1930 issue of the Naples, New York Record calls it the Fox Playhouse Theatre.

Both the photo caption and a timeline I found on the Internet say that the Playhouse Theatre was demolished in 1972. Judging from the lay of the land in the 1929 photo, and the configuration of business buildings in Canadaigua, the Playhouse must have been on the south side of Chapin Street in the block west of Main Street, which is just about where Google Maps is putting its pin icon on this page.

Writer Michael Winship, a Canandaigua native, devotes a few paragraphs of this article to his memories of the Playhouse Theatre.

I plan to travel to Canandaigua on Thursday to see the town and where The Playhouse once stood.

Joe: Thanks for adding this theatre to CT. I read the Winship article and hope to meet Michael while I’m in Canandaigua on Thursday.

And the description should be changed from “closed” to “demolished”.

I made the trip to Canandaigua and I can confirm that this theatre is no longer off Main Street in that quaint and charming lake community. I did learn there is a performing arts center though I didn’t see it.

The Playhouse Theatre was indeed demolished in 1972 for the new additions to Canandaigua National Bank. The theatre was located next to the bank presidents office and the old telephone exchange building filling most of the parking lot at the rear. When the theatre was demolished it was run by Country Wide Theaters. As high school students doing tech theatre, we made arrangements with the bank to remove any equipment before the demolition. We attended the last movie ‘The Mark of the Devil" (it was awful) and then started removing things following that last matinee. We collected sand bags, counterweights, a couple of arbors and single locking rails, colored lamps from the striplights, a couple of resistance dimmer boards that ended up in many pieces, all the decorative curtains from the boxes, a bit of the main valance and part of the main rag. We could not get the curtain track as it was dead hung from the grid. Some seats, a follow spot and the original plans for the Lake Theatre on Main Street. There were some old ornate frames with 3 sheets on the floor in the plenum under the house seating. A man was taking pictures so we assumed he took the frames. Many years later I asked him about it and he did not. They went down with the building. Ugh! The theatre seated about 1700, with a balcony. The balcony had the original 1922 seats. The orchestra floor had Irwin seating replacements from the 1950’s. The proscenium was 50’ W X 30'H and the stage was 28' deep. It had a fly tower and was a hemp house with pin rail. A few counterweighted line sets were added later for the grand valance, the picture sheet and the strip lights. The grid was wooden with access by a wooden ladder. we only made it to the fly gallery, the ladder was loose going to the grid, we didn’t chance it. It was dark no work lights then and no electric anyway. We only had the light from the 2 sets of large scenery doors 12 H on both SR and USL. It did not have a pit lift, but a sunken pit of about 4 ‘. The theatre originally had a pipe organ, but it had been removed at some point and the chambers on each side of the proscenium filled in for air handling equipment. The picture sheet went to Smith Opera House in Geneva, NY the 2 projectors were removed by Country Wide, whereabouts unknown. They were still carbon, not converted. A week following the demolition, I received a call from the bank wondering when we were going to pick up the curtain track? The contractors saved it from the wreckage and we still are using it today! I will write soon on the local performing arts center mentioned.

This article says that the Playhouse opened on February 20, 1922. It was built for former mayor William J. MacFarlane. An item in the January 22, 1921, issue of The American Contractor said that the new theater to be built at Canandaigua for William McFarlan [sic] was being designed by the firm of Leon H. Lempert & Son.

Uploaded a 1925 photo from the Finger Lake Times.