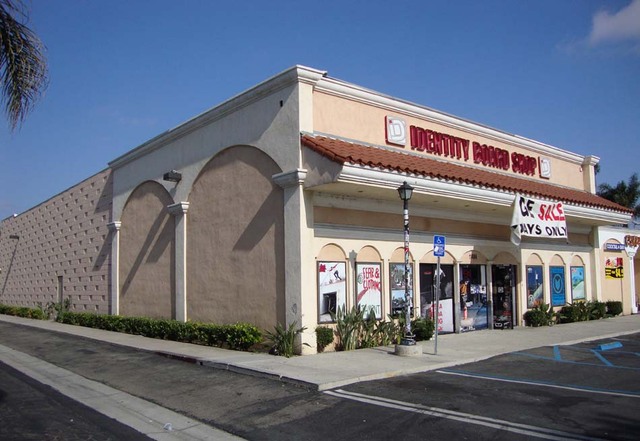 The Buena Park Theatre was opened December 19, 1958 with Glenn Ford in “Torpedo Run” & Cyd Charisse in “Party Girl”. It was one of two identical theatres in the Los Angeles area that were opened by Robert L. Lippert in new shopping centers. It was designed so that it could easily be adapted for commercial/retail use if cinema use failed.

The theatre then briefly house a ‘Concert of Superstars’ attraction. It operates as a skateboard shop today.

I’ve found a couple of references to “William” Overpeck on the Internet, but the architect’s actual first name was Warren. He has been a member of the Architectural Review Board of the Bel Air Association, and a document published by the association indicates why the confusion arose:[quote]“Warren Frazier Overpeck- Bill, as he is called by his friends, graduated from the USC School of Architecture. After graduation he joined the A. Quincy Jones, F.A.I.A. Architectural firm. Two years later he opened his own office in Pacific Palisades, designing custom residences. Later, in
partnership with Bob Kite, their firm designed the John Thomas Dye School after the Bel-Air fire. In 1969 he associated with a major architectural firm to develop Marina City and the Marina City Club”[/quote]The “identical” theater opened by Lippert the same year as the Buena Park was apparently the Corbin Theatre in Tarzana. Presumably it too was designed by Overpeck. The only major difference I can see between the Buena Park as pictured in this Boxoffice feature from 1959 and this 1984 photo of the Corbin is that the Corbin had a traditional marquee, probably added later as it is mounted on columns rather than on the building itself.

On page 14 of the same issue of Boxoffice linked above is an article about Robert Lippert’s twin Riviera and Capri Theatres in Los Angeles, and that project was attributed to architect John P. Edwards with W. F. Overpeck associated. As Lippert had Overpeck work on three projects in a short period, it’s possible that he also designed others of the theaters Lippert was building during the brief time when Overpeck had an individual practice- from about 1958 to 1961, as near as I’ve been able to determine.

The Box Office Magazine feature, linked above, ultimately held true (regaurding easy conversion to retail). Aside from remodeling the entry facade, the present day building did exactly what the article mentioned; they removed the false floor (to achieve level), extracted the theatre fixtures, and converted the booth to an office, creating the store that inhabits the site today. Stepping inside the skate shop this afternoon (7/5/10), there was no mistaking it’s former life as a theatre; with the exception of the above mentioned alterations and racks of skateboard supplies, it remains relatively unchanged.

Can this theater name be changed to the Buena Park theater? it was only the Studio when it was an X rated theater. I posted a picture of the original theater.

Linkrot repair: The October 19, 1959, Boxoffice portfolio with pictures of the Buena Park Theatre can now be seen at this link.

During the theatre’s tenure as Studio Adultland the venue featured one unique/disturbing amenity,a hot tub. How long this feature lasted and whether anyone actually dared to utilize the tub is unknown.