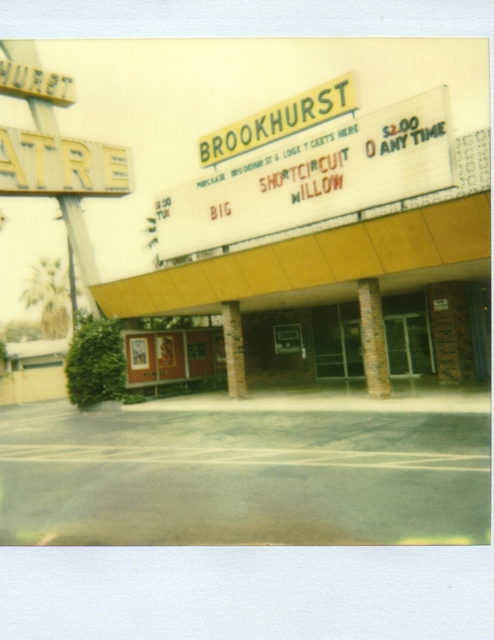 This was a very small but plush cinema with all-loge seating for about 200 patrons built next door to the original Brookhurst Theatre. It had a separate boxoffice, concessions and facilities with the ambience of a screening room. The opening day ad on February 18, 1970 billed the theatre as having an “adults only” policy, not because of film content, but as a way of giving adults a peaceful place to watch movies.

The admission price was also more than that at the original Brookhurst Theatre. The opening attraction, “Oliver!”, was also playing at the larger Brookhurst Theatre, but most of the time the Brookhouse Loge played its own films. It ceased operations as a theater in 1996 and by 2003 the building’s occupant was a cosmetology school. The original poster cases at the entrance still remained until it was demolished in February 2014.

While operated somewhat independently (as an “adults only” venue) for it’s first twenty or so years, the Loge became the Brookhurst Theatre’s fifth auditorium, following the larger theatre’s early 90’s quading. The Loge remained physically seperate from the Brookhurst, but the marquee, bookings, operations, etc. began to utilize the Loge as a traditional auditorium (dropping the luxury, “adults only” idea) during it’s final years.

The cosmetology school moved and the unit is currently (3/12) vacant.

The Loge, along with the neighboring Brookhurst Theatre, was razed on 2/27/14.

Circa 1992 photo added via Joe Pinney. Whose father was assistant manager there in 1972.