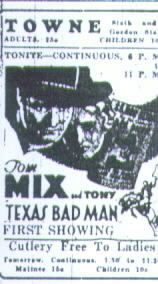 In July 1983 the building was converted into 14-apartments.

Today it’s an apartment building and you enter the property thoug a door that was a side fire door when it was a theater. But if you know what it looked like, you still can see where the front entrance was as the 2d and 3d floor looks the same…

Some photos taken by the local newspaper around 1982