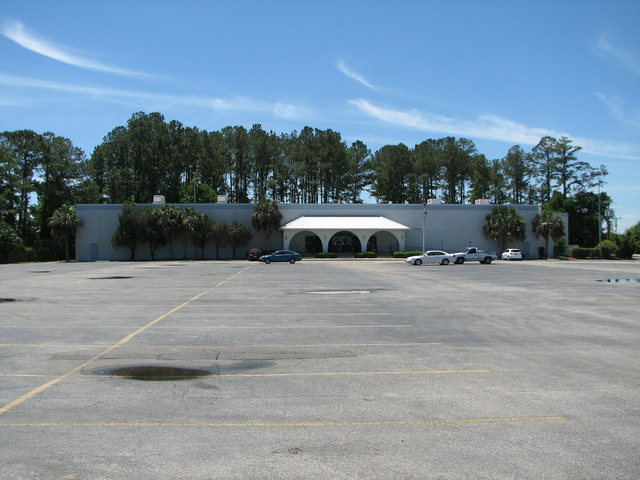 This cinema opened as a twin in 1977. It became the Cinema 90 6 in 1990 with seating listed at 1,490. The 90 is for HWY where the theatre is located and the six is for the number of screens. The theatre was operated by United Artists and in 2002 fell under the Regal banner.

Any further information on the Cinema 90 6 would be appreciated.

Apparently this theater was opened by United Artists.

Notice how the neither the building nor the marquee make any mention of the name of the theater or the operator.

A rather awkward name for a theater though; one would think that, at a minimum, something simple such as Highway 90 Cinemas would be less clumsy.

Before UA’s bankruptcy and merger into the Regal chain, the chain, unlike many others, did not always use United Artists or UA to identify its theaters either in directory ads or as a part of a theater’s signage, though the name would appear on door decals, the pre-show filmed segments, etc. A significant number of theaters that the UA circuit opened in the 1970s were simply known as “The Movies at ______”

This theatre was built in the spring of 1977 by who was martin & davis but then a man named cumba married one of martins daughters to become MCM Theatres Inc. In 1987 a man named McKisset bought it to be Litchfield.McKisset died in his plane crash and it was bought by regal.