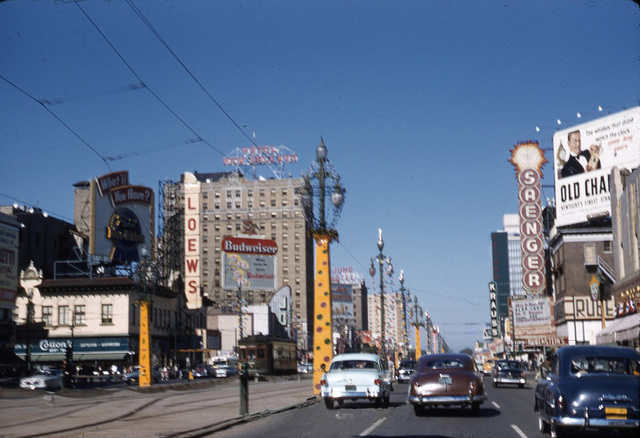 Built in 1926 for the Loew’s circuit, the State Theatre was designed by the prodigious theatre architect, Thomas W. Lamb. Around the same time that Loew’s opened the State Theatre on April 3, 1926 with Norma Shearer in “The Devil’s Circus”, the Saenger circuit opened their theatre directly across Canal Street.

Originally seating 3,335, and designed in a mix of Renaissance motifs, the State Theatre also contained a 3/13 Robert Morton organ similar to that installed at the same time in the Saenger Theatre. Unfortunately, unlike the Saenger Theatre’s organ, the State Theatre’s did not survive, being used only until 1932 and later heavily damaged during a flood and left to fall into disrepair in the ensuing decades.

On March 5 1976, the State Theatre was tripled, with two screens on the main floor and the balcony becoming the third screen. Reopening movies were “Emmanuelle - The Joys of a Woman”, Fred Williamson in “Mean Johnny Barrows” and Ron Van Clief in “The Black Dragon’s Revenge”. After closing as a movie house in the late-1980’s, the sub-division partitions were removed, and the State Theatre was restored and renamed, as the State Palace Theatre, screening classic movies and offering concerts. The theatre was closed due to damage caused by Hurricane Katrina, and was later reopened.

Though it is somewhat rough along the edges, the State Palace Theatre still has a definite faded elegance that adds to its atmosphere, as well as excellent accoustics, making it one of New Orleans' enduring entertainment destinations.

Sadly, the State Palace Theatre has been closed since February 15, 2007 due to fire code violations. In April 2018 the owners of the building filed plans to demolish it and build a hotel on the site. Those plans have been dropped.

Loew’s was the theatre chain, Lowes is the home improvement chain.

Loew’s state, it was a typo.

This building has been sold and, from what I hear, is going to be reopened as a theatre sort of like the Saenger across the street. NO MORE RAVES.

The sale to Gregor Fox dooms this theater to sit for years in its current state of damage and deterioration. Mr. Fox stated in a local news article that he plans to first renovate the commercial retail space within the building to then fund the renovation of the theater; a process that may take up to ten years. Personally, I do not believe him. I think his intention is to use the leases from the retail spaces on Canal to pay the annual taxes until he can flip the property to legitimate developers years from now at a tremendous profit. Mr. Fox has little experience in real estate development, nor does he have the resources, or experience, to renovate a 1920s movie palace to its former glory. He purchased the theater and the property it sits on for just $3 million. Mr. Fox believes that the theater can be fully renovated for $10 million, this when the renovation of the Saenger Theater located across from the Loew’s was recently performed at a cost exceeding $50 million. I hope I’m mistaken, but there is no evidence that the Loew’s is coming back anytime soon. Every indication is that it will remain a blight on Canal Street for years to come.

Here is a link verifying the information I have provided…

The Loew’s State (State Palace) is one of the 24 theaters in my new book, “After the Final Curtain: The Fall of the American Movie Theater,” which is available on Amazon or your local bookstore

Why is this theatre not listed under the correct name? It is the “LOEW’S STATE” theatre. Not the silly “State Palace” as was invented by the operators after Loew’s discontinued operating the theatre in the late 70’s or early 80’s.

Because Cinema Treasures lists all theatres as their current and/or last known names. “Loew’s State Theatre” is listed under Previous Names in the right hand column, beneath Previously Operated By, Architects and Styles.

Contrary to what is stated above, the Loews State was saved from the wrecking ball. And the New Orleans City Council rejected the plans proposed by a hotel developer to essentially gut the theater and make it the entrance to a new hotel. Hope remains that the theater will be saved. New Orleans is fortunate in that nearly all of its large downtown theaters survived and all except the Loews have been freshly restored. The Civic, the Joy, the Orpheum, and the Saenger, are open and thriving. The St. Charles Theater, the Strand, and the Liberty, long ago were razed.