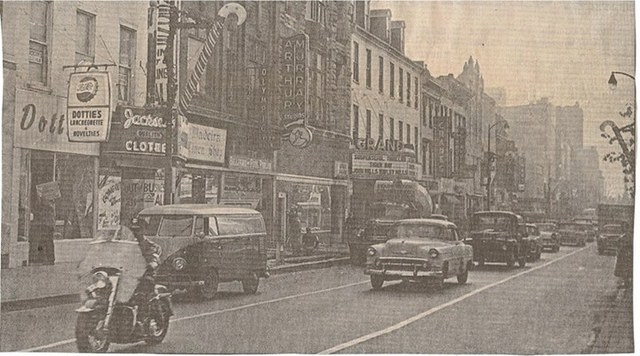 The Grand Theatre was the smaller of the theatres in the 100 block of N. Queen Street, with seating listed at 873. From what I found it might have been the oldest also. It was opened on October 6, 1913 with Robert Broderick in “Arizona”. The Grand Theatre was later operated by Warner Bros. and its subsidiaries.

The Grand Theatre closed in 1969 for a redevelopment of the area.

While the Capitol and Boyd Theatres were still operating the Grand Theatre was showing mostly double feature attractions. The Grand had a long lobby with a small outside box office. The lobby inclined up from the entrance doors from the street until the entrance doors to the auditorium. The rest room entrances were actually at the back of the auditorium and you had to go down a flight of steps as they were located on the “basement” level. I never remember the Grand Theatre having a stage. It was, if I remember correctly, the first theatre that I ever went to that did not have a curtain in front of the screen. Maybe it did at one time, but that was eliminated for a larger screen. I know on either side of the screen were exit doors that got you to what was called Christian Street, which was no more than an alley. The Grand became first one when it became the last movie theatre downtown. However, before that happened, the local first run engagement of “Mary Poppins” was at this theatre it played for a recording breaking 20 week engagement. There was nothing striking about the Grand. The concession stand was in the back of the auditorium as well, which I could not figure out as the long wide outter lobby would have been a better location. Because the inner lobby was not much wider across the width of the auditorium as an aisle. More later when I do some researching.

You mean the Concession was behind the screen when you wrote"Back of the auditorium?

I saw this on the big screen at the Grand. They used to post window card-type posters on the walls of downtown Lancaster around the theater.
So I had a beautiful copy of this Saul Bass design in black-and-white with blue accents. Wish I still had it. The RCA soundtrack (Jerry Goldsmith) LP cover is similar.
Notice Mrs. Otto Preminger’s autograph on the page (from an AMPAS tribute to Preminger).
She worked on the costumes for the film.