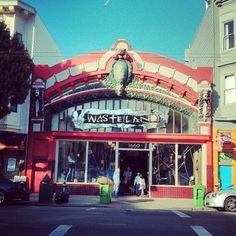 Located in Haight-Ashbury on Haight Street between Cole Street and Clayton Street, the Sunset Theatre opened in 1911. It is notable for its ornate Art Nouveau style facade, which has recently been painted fire-engine red. Later renamed Superba Theatre, it was closed in 1924.

The theater later served as a market after closing and today is home to Wasteland, a vintage clothing store.

Does anyone know if this showed movies, movies and vaudeville, or if it was a theater for stage plays in the early 1920s? Thanks, Leslie

An Architectural Guidebook to San Francisco and the Bay Area by Susan Dinkelspiel Cerny says that this house opened in 1911 as a nickelodeon called the Sunset Theatre, and was in operation as the Superba until 1924. The architect was Bernard J. Joseph.

Bernard J. Jospeh had been in a partnership with architect G. Albert Lansburgh from 1906 to 1908, and collaborated with him on a number of projects even after Lansburgh had established his own practice, including the Orpheum Theatre on O'Farrell Street, opened in 1909.

I’ve found a reference to a house called the Sunset Theatre at 630 Irving Street, San Francisco, in the March 25, 1916, issue of The Moving Picture World. That’s only a bit over a mile from the Superba, so unless the two theaters used the same name at the same time for a while, which seems unlikely, this house must have changed its name before the house on Irving Street opened.

Considerable remnants of the interior decor survive, mainly rows of Ionic pilasters along the sidewalls.