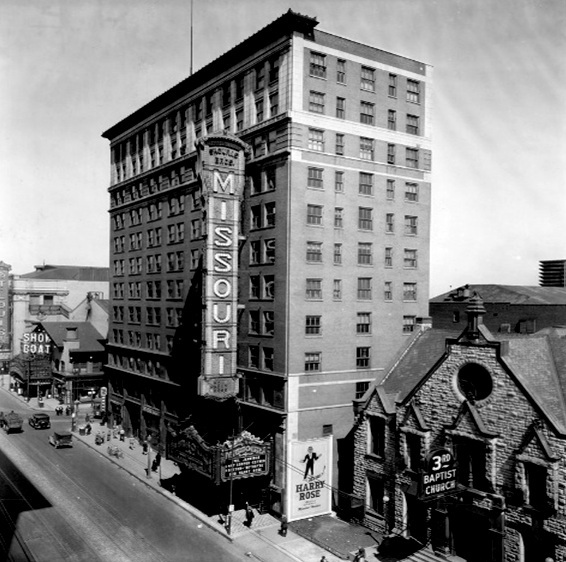 The Missouri Theatre was one of the most popular theatres in St. Louis in the 1920’s. It was located at N. Grand Boulevard and Lucas Avenue, and was opened on November 8, 1920 with Elliott Dexter in “Behold My Wife!”. The temple of entertainment seated about 3,600 and was one of the largest theatres in the nation at that time. It was designed by the firm of DeRosa & Pereira for the Famous Players Missouri circuit, which was a subsidiary of the Famous Players Lasky circuit.

Luxury abounded, rotundas with massive chairs, fireplaces in many rooms and three inch thick carpeting added to the already impressive decor. The interior featured arches and Corinthian columns. Curved architecture throughout the theatre gave the impression of softness in contrast to modern streamlined architecture. The twelve story Missouri Theatre building was brick, but the theatre was distinguished by a light stone front.

The Missouri Theatre was one of the first theatres in St. Louis to have air conditioning, which was a big deal then. It was called “the Pike’s Peak Breeze” in it’s advertising of the air conditioning.

The theatre housed inside the twelve story Missouri Theatre Building. The theatre was later operated by Skouras Bros., RKO, and Fanchon & Marco which evolved into Arthur Enterprises. The Missouri Theatre was so successful that the Skouras Brothers went on to build a sister theatre only a block away, the St. Louis Theatre (now Powell Symphony Hall).

The Missouri Theatre featured a chorus line of dancers known as the Missouri Rocket Girls. This troup of precision dancers became well known throughout St. Louis. They we so successful that they toured the country, eventually settling at the famed Roxy Theatre in New York City as the Roxyettes in March 1927. The Missouri Theatre was equipped with a Wurlitzer Hope-Jones Unit Orchestra organ which had 4 Manuals, 32 Ranks. It was dedicated in July 1921.

The first console of the Missouri died in a fire due to a careless smoker. The 2nd console along with a new expanded unification relay took it’s place and made the organ noteworthy. In 1954 the console was purchased by Harvey Heck and made it part of the Graumann’s Egyptian Theatre Wurlitzer that he owned. In 1972 it became part of Bill Brown’s Wurlitzer in the first “Organ Stop Pizza”. In 1987 the restaraunt closed , organ removed and was sold to Jim and Sherrie Krughoff in Downers Grove, IL and Dave Junchen restored it and it is now part of the Krughoff Residence Wurlitzer since Aug. 5, 1989 when it was formally dedicated.
jgrebe

I recently read that Elvis Presley performed at the Missouri Theater Oct 21 – 23 1955. He was touring with the Roy Acuff jamboree. Anyone know anything about this?

That is correct. The attraction was a Grand Ole Opry show with Roy Acoff, Kitty Wells, Johnnie and Jack, Pop and his Jug Band, Smoky Mountain Boys, Tennessee Mountain Boys, and “Extra Added: Sensational New Star” Elvis Presley. Two shows the nights of the 21st and 22nd, three on the 23rd. Admission: 75-cents in advance; $1.00 at the door. Kids 25-cents.

The building which housed the Missouri Theatre is set to be redeveloped as a hotel and luxury apartment complex.

The De Rosa in the firm of De Rosa & Pereira was Eugene De Rosa of New York City. It’s very likely that his partner was Percival Pereira. The October, 1919, issue of The Bridgemen’s Magazine had this item:

Percival Pereira’s middle name was Raymond. He had worked in Thomas Lamb’s office until 1915. At that time, according to this thumbnail biography from Historic Detroit, he became an associate of Detroit architect C. Howard Crane, who had opened a New York branch office. It’s not clear how long Pereira was associated with Crane, but Pereira did design projects in Detroit in the 1920s. De Rosa & Pereira were listed in the 1921 Year Book of the New York Society of Architects with offices at 110 W. 40th Street.

Missouri Theatre blade in the background. 1954 photo added to the Photos Section courtesy of the Vintage St. Louis Facebook page.

Usage of “blade” is frowned on here. The preferred word for such signs is “vertical,” though “upright” would also be acceptable.

This is the first I’ve ever heard of “blade” as being frowned upon, in my 12 years on CT.
Do you have any examples of discussions where this is the case? Blade has pretty much been the standard design name for that type of sign both on & off CT for decades. If you Google “Blade Sign Cinema Treasures”, the term comes up in many comments within theatres listed on CT. Welcome to CT by the way. Since it appears you’ve just recently joined last September.

The site prefers the terms vertical or upright in the description when you submit a new theater, but I doubt if there is a moderator who is going to go through all the comments on the site and give demerits to anyone who has used the term blade in them.