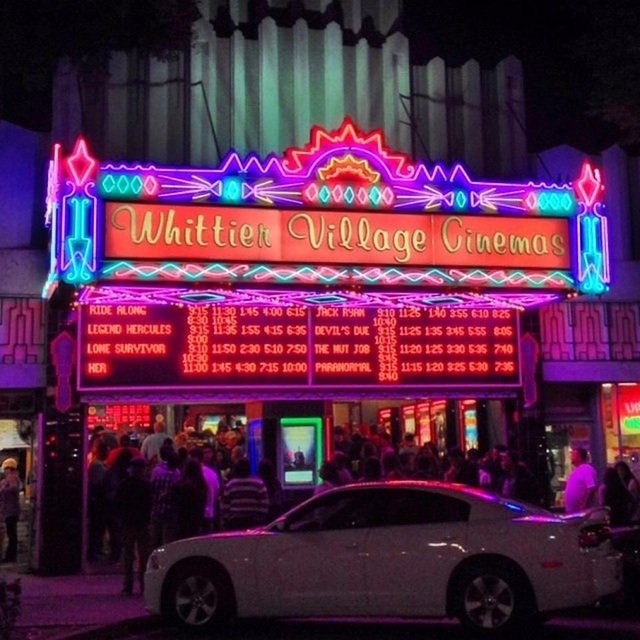 A news account in 1931 reported that architect David S. Bushnell was preparing plans for a theater, costing $90,000, seating 1,000 and to be leased to a theater chain (United Artists). Because of the depression, according to the Whittier Historical Society, the lease was broken and the owner, Aubrey Wardman, ended up operating the theater with the architect serving as the manager. The Bushnell’s Wardman Theater was opened on March 15, 1932 with Lew Ayers in “All Quiet of the Western Front” plus vaudeville on the stage.

The Wardman Theatre remained independent except for a time beginning in the 1970’s when it was operated by Pacific Theatres and by early-1977 it was operated by Pussycat Theatres. The October 1, 1987 Whittier Narrows earthquake nearly finished the theatre, but it was reconstructed to the plans of architect David Harper, with the original auditorium divided and more screens added by building an annex, reopening on August 24, 1990.

Its recently added stadium seating rises over the entrance to the old auditorium and the empty space below the risers has been converted to a video game arcade. Because a nearby Regal theatre closed, the independently operated theatre now has no serious competition.

One of my fond memories of the Wardman Theater was standing in line waiting to see the August 1964 release of A Hard Day’s Night. We Beatlemanics were in line for hours to see the movie. Everyone talked about John Lennon’s book, 16 magazine, and our Beatle bubble gum cards. Then you could mail $25 to get Hollywood Bowl tickets to see the Beatles. Now I go to the Whittier Village Cinemas to watch sci-fi and Harry Potter films. Yes, I remember the old drapes and decor…but it’s the price of popcorn that creeps me out! However, you can’t beat the admission and location…it’s small town-like.

WHITTIER-Community leaders hope to appeal to the business sense of X-rated movie theater chain owner Vincent Miranda. If all goes well, they say, Miranda will be convinced that conversion of the Wardman Theater into a multi-theater complex showing general run films would be profitable and a valuable asset to a nearby redevelopment project.

Mirandaâ€™s recent acquisition of the Wardman Theater from Pacific Theaters has touched off controversy here. The S. Greenleaf Avenue cinema is showing two sexually explicit films. Although just outside the Greenleaf Ave./Uptown Redevelopment Project, businessmen are fearful that the presence of an X-rated theater may have a detrimental effect on potential developers. There is also apprehension that other adult-only businesses may be attracted to the area.

A coalition of business, church and parents groups has formed to voice objections to the showing of adult-oriented films at the Wardman. Recently, coalition spokesmen visited Miranda at his Hollywood offices. â€œWe tried to suggest to him that a four-theater complex would make itâ€, said City Councilwoman Delta Murphy. â€œWe told him that it would be an economic plus for him and an economic plus for the city. We said that if he is not interested in that, we wanted a lease price and a lease option price.â€

Miranda said he is considering the coalitionâ€™s proposals. But he expressed doubt that a multi-theater complex at the Greenleaf site would be feasible. At this point, Miranda said he would be more interested in sale of the Wardman rather than a lease agreement. Miranda has promised to forward a sale price to the coalition leaders. â€œWe do buy and sell theatersâ€, he said.

In the 1950’s, the Wardman was part of the Bruen’s Whittier Theatres company. Hugh W. Bruen also operated the Whittier and the Roxy, where he kept his office. In about 1953, he built the Sundown Drive-In.

even when it showed adult films it still retained it’s marquee and architectural beauty as a single auditorium theater, with the warrior design and the flashing colors in front.. turning it into a six-plex totally ruined it as well as the historical beauty of the entire block..

I remember seeing “Rhapsody In Blue” at the old Wardman Theater when it first came out in 1945. My stepfather, who worked for the railroad, had a part-time job of cleaning the Roxy, Wardman and Whittier theaters after closing. I remember many times going to the movies, falling asleep, he would wake me up, I would help him sweep up and then we would go home.

I live in the area, and I go there all the time!

MikeCoke on restrooms: You’re right, they were on high level.

The project began as the proposed United Artists Theatre. But upon its launch, it opened as Bushnell’s Wardman Theatre on March 15, 1932 with “All Quiet on the Western Front” supported by a newsreel, a travelogue called “Cross Road” and five acts of vaudeville. Stars at the opening included “Western Front’s” Edmund Breese, Yola D'Avril and Rita Cavalier.

The theatre was tri-plexed becoming an adult theatre. It closed after the Whittier Narrows earthquake of October 1, 1987. However, the theatre was refurbished and relaunched in 1990.