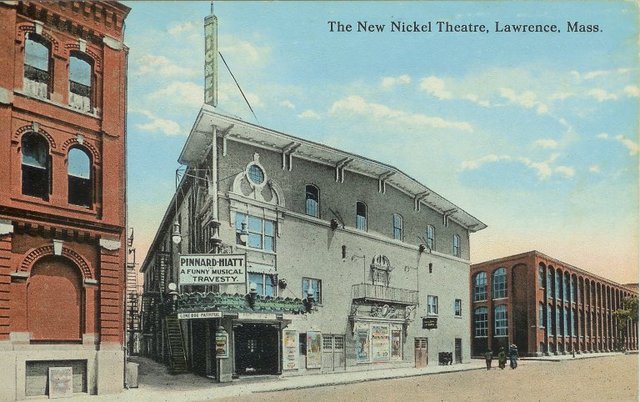 In 1900 the "New Theater" was opened on Lawrence Street near Essex Street on the the Northeast corner of Lawrence and Methuen Streets. It was renamed the Castro Theatre in 1902 and then the Nickel Theater by 1907. It was reputedly located above Porter’s livery stable and according to Lawrence, Massachusetts: Images of America by Ertha Dengler, offered continuous performances of "moving pictures and illustrated songs for 5 cents daily from 2 to-10:30 pm. In 1910 it was replaced by a new building at the same loacation, 1 Lawrence St. called the "New Nickel".

The Moving Picture World magazine, in October of 1913, reported that Mr. John R. Oldfield opened his Nickel Theater, Lawrence, Mass., to good business last week. The policy is vaudville and a good grade of film service. Messrs. (Thomas F.) Twoomey and (Napolean) Demara, the owners, have made a big winner out of the Nickel, as they also have done with the Premier Theater of Lawrence, which they own.

At the time, Massachusetts had what was referred to as a "five minute law" that required a break of five minutes after every twenty minutes of motion picture exhibition. The next issue of Moving Picture World reported that Toomey and Demara met in Boston with other members of the Motion Picture Exhibitors League of Massachusetts in favor of abolishment of the law and also to do its utmost to secure licenses for Sunday night concerts in Mass cities at present forbidding them, due to local opposition of the clergy. Through organization’s efforts the bill was repealed the following year.

By 1914 the Toomey & Demara Amusement Company controlled the Nickel Theater, the Premier Theater (at 554 Essex Street) and the Broadway Theater in Lawrence. That year they announced plans to tear down their new Nickel Theater and to take the entire structure and lot, which they own, and to remodel and reconstruct it by building a new $200,000 theater, with a seating capacity of over 3,000. The new house is to have all the latest and most modern equipment, including escalators to the balconies, a $20,000 organ, and other features. The new theater will be one the largest, most modern and thoroughly fireproof houses In New England.
The resultant theater, the Empire Theatre, was not quite as large as announced, but in 1915, at the time seating 2,300, it became the largest movie house in Lawrence.

Correction, the reference in the first paragraph should read “according to Lawrence, Massachusetts: Images of America Vol. II by Ken Skulski.”