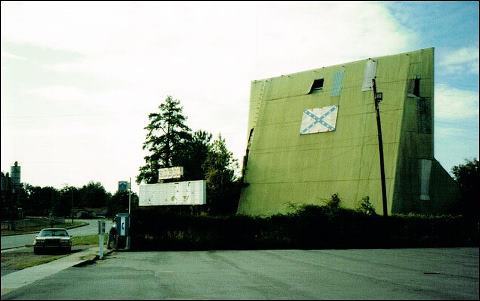 This ozoner began its life as the Grove Drive-In in 1949, with a capacity for 350 cars. Located on Vandell Boulevard at Forest Avenue in the Gadsden area of Alabama City. It closed for a period of time in the late-1950’s.

Georgia Theatres reopened the theatre on August 7, 1964 renaming it the Rebel Drive-In. Car capacity was listed at 250.

The drive-in closed in October 1985. It was demolished in 1993. Any further information on the Rebel Drive-In would be appreciated.

Could it have been called the West Ranch Drive-in in 1956,That Drive-in however parked 350.Unless it was a typo. Anyways Jan.8.1970 has the Rebel Drive-in playing “MIDNIGHT COWBOY” and “NUMBER ONE”.

Not sure what road the entrance was on, but this map address will take you right to it.

Above address for this drive-in is incorrect. Now Village Chapel Funeral Home @ 101 Vandell Boulevard. The rear ramp is still there.

Over the years, address numbers get changed, roads get renamed, and property gets bought and split up and renumbered. Because a movie ad, city directory, phone book says it is at a certain address with XXXX number in 1955. Then fast forward to 2013. It might be different. I have friend that worked in the street dept. back in the day and I asked him about that. In the 1950-1960’s, the cities and county’s would change the street names and numbers has the need arises!

Well said Chuck!! I just uploaded a movie ad for the Grove DI. It is listed on Attallia Blvd. Name change on the street? Goodson I see wrote an article about the drive-in theatres in Gadsden in the local paper. Could you write new overviews/ add current pictures/add the theatres in Gadsden that are missing and submit them, so Ken can change them?

The names of the streets and addresses have changed wildly over the years. “Attalla Boulevard” is another name for that portion of Forrest Avenue, since it was so close to Attalla. That portion of Van Courtland Street was eventually four-laned and curved into another street, becoming Vandell Boulevard. There have been a lot of changes in that area and multiple addresses but just about every one you’ve seen was correct at the time.

BTW my research indicates the Grove went dark in the summer of 1957. The dates on the re-opening and closing of the Rebel are correct.

The “West Ranch” is actually the often misidentified “Ranch W,” a drive-in located on the other side of Etowah County, Highway 278 near Hokes Bluff. It was called the “Ranch W” after its founder, Ward Wright. Some people mistakenly think the “W” stands for “West” or something. The Ranch W only lasted a few years, 1952-55 or so.