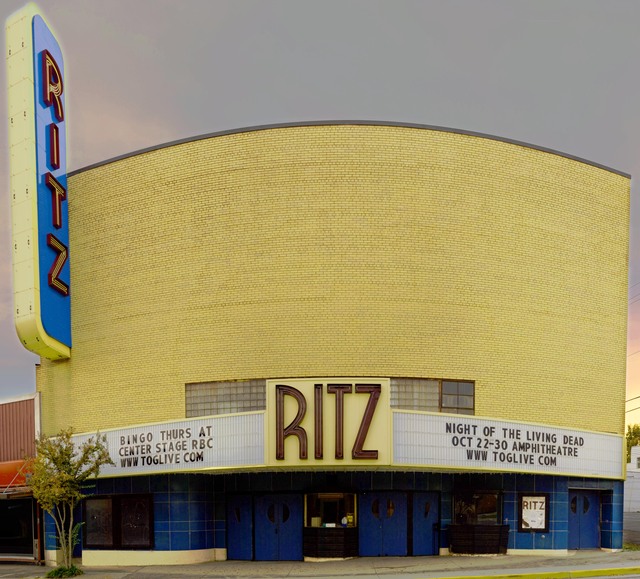 The Ritz Theatre is located in the Alabama City section of Gadsden, a formerly independent town, annexed to the city of Gadsden in the 1930’s. The Ritz Theatre opened on July 4, 1928 with Wallace Beery in “We’re In The Navy”. It was first located next door to the current site, and spent its first five years as a nickelodeon.

The Ritz Theatre moved to the current address in 1932, into a building formerly occupied by a grocery store. The size of the grocery store can be seen on the side-wall of the building, where the style of brick changes abruptly about a third of the way up the wall. The first major renovation was in 1938 when the current lobby and balcony were constructed. This renovation also expanded the seating capacity to 800.

The next renovation came in 1948 when seats were replaced and a cry room was added at the rear of the auditorium. This was also when the exterior custom yellow brick facade was created and the current marquee and vertical sign were erected.

The Ritz Theatre screened its final program on February 20, 1965, a double feature program of “The Time Travellers” and “Unearthly Stranger”. Gadsden Civic Theatre purchased the building and reopened the Ritz Theatre as a legitimate theatre on October 26, 1971, with the stage production of “Born Yesterday”. GCT would later merge with two local companies to form the Theatre of Gadsden, which still rents the space today.

In 1986, the Ritz Theatre received much needed attention to its exterior with a full sprucing up of the custom yellow brick and the signage, through a community development block grant. In 2008, the major interior renovations began, which included new air conditioning, fire sprinkler system, single membrane roof, updated electrical, lobby terrazzo restoration, and reconfiguring the auditorium seating to the original layout. In August 2011, the Ritz Theatre entered into a partnership with the Alabama City Public Library to begin showing movies again on the big screen. This began with the December 15, 2011 screening of “Gone With The Wind” (the 72nd anniversary of the films' original premiere). This will be followed by a week-long Christmas At The Ritz! movie festival. Beginning January 2012, the Ritz Theatre will be home to the Library’s ‘Thursday Movie Day’ screenings. The theatre is also developing a partnership with the local Cultural Arts Center to host educational screenings in conjunction with the Gadsden Reads program.

The theater is being renovated: View link

The Ritz Theatre is back in operation after a three-year remodeling and updating job. New fire sprinkler system, new wiring, new lighting, and a new roof. See www.toglive.com for upcoming events.

Movies are back on screen at The Ritz! Our first showing will be “Gone With The Wind” on December 15, 2011, 6pm. After that, we will have a week-long Christmas At The Ritz! movie festival and then regular semi-weekly screenings will begin in January 2012.

We are not closed! We are in full swing operation with stage plays, movies, and multipurpose facility rentals available to the public.

The Ritz is open, but apparently no longer showing movies— at least the current web site doesn’t list any.

In the mid to late ‘80s I would go here to practice stage plays with my school. It was the first time I became aware of racial segregation in a way that stuck with me to this day. There was still a sign up that said Negros Only or Colored Entrance, something to that affect. It was located around the double door entrance that is at the far right of the front of the building. I believe it went up straight up to the balcony.