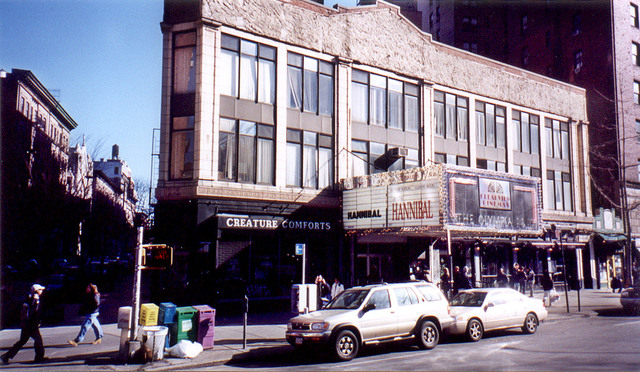 Located just six blocks north of the former Art Deco style Metro Theatre, the modest Olympia Theatre had been a neighborhood favorite since it opened in 1914. It was operated by Golden Theatres by 1980 and they converted it into a triple screen theatre on December 19, 1980 and on June 26, 1981 it became a quad. Taken over by Cineplex Odeon it was reduced to become a twin-screen theatre on December 6, 1987.

Growing up across the street from the Olympia I was privy to its many reincarnations. I recall in the mid 60’s it became the venue for the Spanish speaking community by showing Latin American films. In the 70’s it became controversial (at the time) for showing films like “The Devil in Miss Jones”. I remember the media blitz that descended on our normally unassuming neighborhood when it first showed. The Olympia had a very small background role in the movie “Harry and Tonto” starring Art Carney. It wasn’t Mr. Carney’s last movie to be shot on locale. If I recall correctly, it was the first movie house to break the $10 admission barrier. Now in its place stands a high rise luxury apartment building. Just like so many other icons of our youth, gone, but never forgotten.

A rare theater to have been multiplexed and then to have had the number of screens REDUCED from four to two!

Yes, Cineplex Odeon also reduced screens at the 23rd Street West. It was a move away from arthouse and towards mainstream by CO in Manhattan.

Here is an ad for the 1964 re-opening as a Spanish language house.

Thanks for these great ads, Mark!

the only film i can remember seeing here was “Everyone’s All American” starring Dennis Quad. so i guess had to be prior to 2003.

The Olympia and (three blocks north) the Nemo were my neighborhood theaters in the 1940’s and 50’s. The Olympia was smaller and (back in the 50’s) slightly more elegant and ‘atmospheric’ than the Nemo. Fond memories. I left New York in 1961 when they were still operating as mainstream, though second-run, theaters.