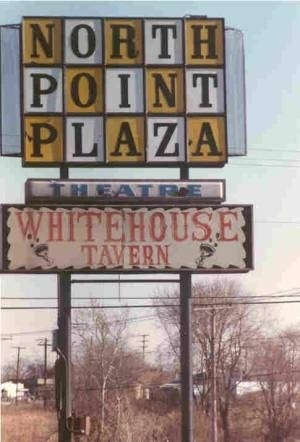 Opened March 16, 1966 with Hayley Mills in “That Darn Cat”. It had 911 seats, the Northpoint Plaza Theater originated as single screen, first run movie theater. It could screen 70mm and Todd-AO films

Acquired by JF Theaters in 1984 it was converted into a 4-screen theatre from November 20, 1984. It was eventually acquired by Loews Theaters. It ran as discount house up until the summer of 1998 where it would find its demise. The building was demolished soon after and a Walmart was put in its place.

Another Walmart is at this former Loews location.

Picture of the cinema from the Mary Poppins Ad from July 27th, 1973 can be found in the photo section. It opened on March 27th, 1966. I was unable to find an grand opening ad in the Sun.

I was the manager of the Northpoint when it opened as a 4-plex. Some great memories here. I was also the manager when a storm tore the roof off. While repairing it, a workman, who was welding, dropped sparks into one of the auditoriums, setting the seats on fire. I ended up moving to the Yorkridge. I moved to Kansas City in 1995. 2 weeks ago I was visiting Baltimore and stopped by the old girl, now a Walmart. Sadly, most of the theatres I managed in Baltimore (Yorkridge, Northpoint, Joppatowne, Campus Hills, Timonium) were gone.

The North Point Plaza Shopping Center opened theatre-less late in 1963. However, a year later, a theatre was announced by the fledgling John G. Broumas Theatre Circuit. Broumas specialized in 700-800 seat single-screen theatres boasting road show capability, 70mm projection and stereo sound. Broumas opened the North Point Plaza Theatre with Dean Jones in “That Darn Cat” on March 16, 1966. Months later, Broumas' circuit was under investigation and in early 1967 it was defunct.

The North Point carried on without him / them and doggedly as a single-screen venue all the way into 1984. But after closing for renovations in Setpember of 1984 for J-F Theatres, the theatre was quadplexed with a an extension reopening with free open house screenings on November 29, 1984 with “Risky Business,” “Greystoke,” “Superman” and “Never Say Never Again.” Two years later, the theatre was downgraded to a sub-run discount house with all seats $1. In 1988, Loews took over the discount operation and gave it a big refresh in Jun 29, 1990 Grand Reopening as a $1.50 venue with all new projection.