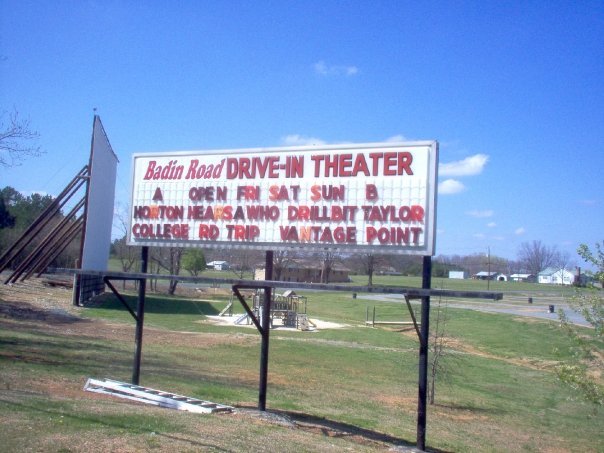 The Badin Road Drive-In opened in late-1948. In 1955 it had a capacity for 400 cars, and has always been a staple in the Albemarle/Badin area. A second screen was added in 2006 and the car capacity increased to 680.

Lacceee, I am writing an article about this drive in for American Road Magazine. Please contact me at dent67198 at mypacks dot net. I’d love to include some information about your grandfather.

This was one of the remaining five outdoor drive-in theatres operating in the state of North Carolina. The others are located in Shelby, Henderson, Albemarle, Bessemer City, and Mount Airy.

The Drive-In Theatre Owners Associate site says the the Badin Road reopened in 1994, which indicates that it was closed before that.

According to The Stanley News and Press, The theater was built by Gilbert Faw and son Raymond. Ethel Faw, Raymond’s wife, said she thought the drive-in first opened in the late 1940s or early 1950s.

“That’s the best I can remember,” Faw said. “Raymond ran the theater until 1966, then he leased it out.”

Faw said after the lease ran out, the theater closed down for a few years.

In the late ’90s, Martin Murray operated the theater until (David and Judy) Robinson bought it in February 2003.

Roy Speights lives across from the drive-in and remembers when it was first built.

“We moved in our house June 1948,” Speights said. “I remember they were grading for the parking then. The theater must have opened later that summer or fall.”

When owner info returned in the 1978-82 MPAs, both drive-ins listed Exhibitors, and the capacities were down a bit (Badin Road 500, Albemarle 250). Both were owned by Piedmont in the 1984 edition. For 1986-88, the Albemarle was the only one on the list, owned by Piedmont.

Where was the other drive in theater located in Albemarle?

Also has a horseshoe pit(possibly unique?).