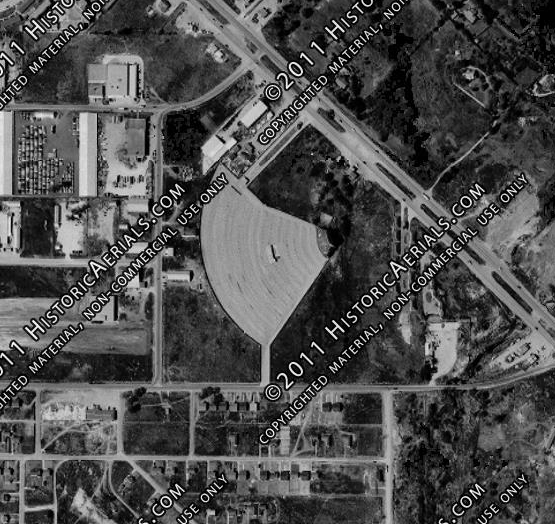 What made me think the BIG D DRIVE-IN was in Dallas. It parked 750 cars and in 1956 it was owned by Childress Circuit.

When Ken mc had Nov.1963 I thought it might have to do with President Kennedy being Killed. I know the theatres here in Augusta cancelled the afternoon shows, but the evening shows went on.I guess on Nov.22 there were alot of dark screens that night.

I managed to save few through the years,but not near enough.I love to see the art work most of all.

It’s hard to think that the site of the,

This drive-in was around as early as 1952 from the photographic evidence. Hard to tell, but looks like it was still operational until about as late as 1972. It was completely gone by 1979.

The 600-car, Big-D Drive-In began as the Hines Blvd. Drive-In in 1950. In March of 1951, it opened for the season as the Big D Drive-In. The rebranding under manager Neil Gordon was to reach a wider audience. Gordon pulled out all of the stops to attract audiences including a weekly talent show prior to the screen show called Robert Rutland and Herald ‘Cuz’ Goodman’s Hillbilly Circus Amateur Night, he hosted the “Miracle Horses” doing amazing acts, mystic Curtis Hayes would perform prior to shows, and for the exploitation film, “Street Corner,” Gordon promised nurses in attendance for anyone who passed out. But in December 1951, Gordon sold the Big D to the Phil Isley Theater Circuit. And there was no drop-off under Isley for showmanship as Isley installed Joseph Noble as its manager.

On November 22, 1952, Joseph Noble created the first Dallas-Fort Worth indoor heated auditorium for patrons. Plate glass 48' wide and 7' high looked out at the big screen. Unlike the auditorium and the Brazos Drive-In in Granbury, TX which had separate projection and snack bar, the Big D’s adjoined its snack bar and shared the existing restrooms. Noble plastered signs all over the area promising free lemonade and you could stay for Cecil B. DeMille’s “The Greatest Show on Earth.” Noble also had cake on hand to celebrate the theater’s anniversaries or kid’s birthdays. The theater also applied to provide pay movies via coaxial cable when pay TV was experimented with in 1957.

The theater was robbed often but the most exciting was in 1952 when a thief told of a non-existing hold-up at the Big D. Dallas police swarmed the Big D and searched the entire parking lot. While that was occurring, thieves went to the Northwest Drive-In and robbed it of $650. Almost unbelievably, the crooks didn’t stop at that rouse telling of a hold-up at another drive-in; but this time police sent patrol cars to the all area drive-ins and caught the trio of burglars at the Big D.

On March 19, 1965 John Rowley’s Rowley United Theaters purchased the Isley Circuit including the Big D and also the Granada, Kiest D-I, Crest, Major and Avenue theaters. Within a year, Rowley had dropped the Avenue, Crest, Kiest D-I, and Big D from its portfolio. The Big D was operated independently by Big “D” Theatre Company for the remainder of its lifespan. The company was part of a lawsuit with all of the Rowley theaters amongst others against the city of Dallas in 1965 concerning the timely screening of films to Dallas' censor board. The Big D appears to have closed after the 1970 season which would work out to exactly 20 years and likely signifies an end of lease closing. This was common in land speculation deals and bolstered by the Big D’s demolition and the land is now used by the University of Texas Southwest Medical Center.

I went there a few times after I got my drivers license in 1969 until it closed a year later.