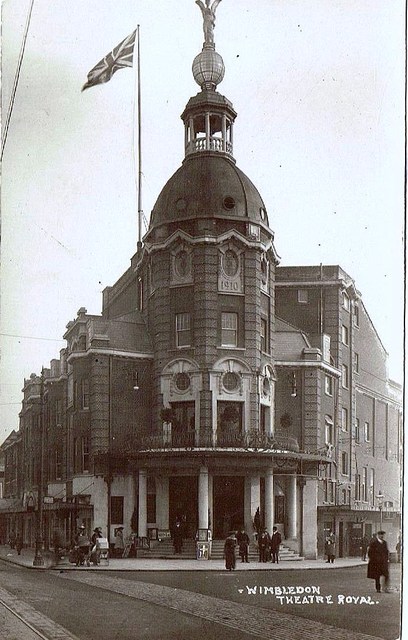 The Wimbledon Theatre opened on 26th December 1910, with 1,727 seats. Located on the corner of The Broadway and Russell Street, the corner entrance has Corinthian colums, with an octagonal Baroque style tower, which is topped by a globe, upon which stands a winged figure. Inside the auditorium seating was provided for 516 in the orchestra stalls, 224 in the pit stalls, 487 in the dress circle, 200 in the amphitheatre and 300 in the gallery. An unusual feature is the open ironwork on the front of the circle and gallery levels, rather than the usual enclosed plaster decorated frontages.

Originally built for J.B. Mullholland, it served first as a variety theatre, and films were presented as part of the programme in the early years. The proscenium is 34 feet wide and the stage is 36 feet deep. There are 14 dressing rooms. The Wimbledon Theatre was damaged by German bombs during World War II, and the top of the dome and the statue mounted on the globe were removed.

It was refurbished in 1968, and was altered and restored in 1991, and further improvements were carried out in 1998.

Almost every London suburb had a live theatre or music hall at the beginning of the twentieth century, and the Wimbledon Theatre is one of only a few to survive into the twenty-first century. In 2004, the Ambassador Theatres Group took over the theatre and it was re-named New Wimbledon Theatre. There is also a 50-80 seat Studio Theatre space which is housed in a former ballroom space within the theatre building.

The New Wimbledon Theatre is a Grade II Listed building.

I saw a production of Gilbert & Sullivan’s “HMS Pinafore” on stage here at a Saturday matinee sometime in the 1980s. It was a short walk from the Tube station. If my memory is correct, the foyer was at the level of the first balcony, and one had to walk downstairs to the stalls/ main floor. It was a nice, attractive theater. The scenery loading door for the stage was located down the right side of the building. In the 1980s there was an organization which produced vintage British musicals there.