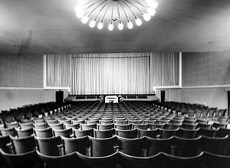 Located in the southwest London district of Wimbledon. The Elite Picture Palace opened on 7th February 1920. It was designed by architect Lt. Col. James E. Adamson. The name ‘Elite’ was inscribed in stone at the top of the building and the brick and stone façade had a semi-circular ‘bow’ shaped extension in the centre which contained the main entrance and windows above. Inside the auditorium seating was provided for 1,005. There was a small organ which was manufactured by a company named Reeves.

In 1925 a new organ was installed, a Christie 3Manual/7Rank theatre organ, which was opened by Steff Langston. In 1927 it was taken over by the J.F. Emery Circuit, but they only operating it for a year. In 1928 it was taken over by Lou Morris and the cinema was enlarged to the plans of architect Robert Cromie and it now had an increase of 280 extra seats giving a total seating capacity of 1,285 when it re-opened in September 1928. It was equipped with a Christie 3 manual 7 ranks organ.

It was closed for re-decoration in July 1931, re-opening on 3rd August 1931 with Claudette Colbert in “Manslaughter”. By 1933 it was operated by London & Southern Super Cinemas Ltd. In October 1935, the Elite Cinema was sold to the large chain of Associated British Cinemas (ABC).

ABC closed the Elite Cinema in mid-summer 1964 and the auditorium was completely re-constructed to the plans of their house architect C. ‘Jack’ Foster. Metal cladding was attached to the façade and the central ‘bow’ section was given a glazed appearance. It re-opened as the ABC on 12th September 1964 with Cliff Richard in “Wonderful Life”. Seating was now provided for 1,030.

The ABC closed on 26th February 1983 with Richard Gere in “An Officer and a Gentleman”. The building was boarded up and was eventually demolished during March-May 1985.

Doolally; Yes the Elite/ABC was almost opposite the Odeon (ex Regal). There is a small, rather bad reproduction photograph of the Elite Picture House in the book “The Amber Valley Gazeteer of Greater London’s Suburban Cinemas 1946-86” by Malcolm Webb. Published in 1986

WOW ! I have been searching a while now, and this is the closest I’ve come. Born in Wimbledon in 1974, I can clearly remember my childhood and the old (elite) A.B.C cinema. I was scared of that metal clad building as a child, but the memories of what it actually looked like are fading. I cannot believe there are no archive pictures anywhere ! I remember the queue which went on for miles to see Jaws and my parents did not want to wait – perhaps I was too young and they used that as an excuse. Perhaps someone has an old snap in the bottom of a wardrobe somewhere.

Sid Deeks was the Chief Projectionist at the ABC Wimbledon during the early 1960’s. I worked there for a year after being promoted to Junior 2nd projectionist from the ABC Streatham. Here is a link to a few projection rooms ‘Boxes’ I worked in. The Elite’s projection room is among them as you scroll down the page. View link

Well im glad im not going crazy. I remember this cinema as a child of the 70,s and yes it was opposite the odeon. They both did well to last as they did considering the close proximity to each other. When i ask people i know if they remember this cinema most cant recall it.
Mind you also growing up in Wimbledon a lot of it has sadly changed up now, like everywhere these days. Still it was a great cinema while it lasted (i too went to see jaws there), oh happy days.
Heres to all those great cinemas that have gone, that gave us so many good times.

A set of vintage photographs of the Elite/ABC:
View link

My late mother worked at the ABC Elite in Wimbledon in the fifties. She came to this Country from Ireland and encountered a lot of anti-Irish sentiment. The manager of the ABC Elite, Mr Riddeford,liked the Irish and employed my mother as an Usherette. He then trained her to work in the Box Office. My mother often spoke of the people with whom she worked at the Elite with great fondness – Miss Casey, a relief manager, Mrs. Cohen who ran the kiosk, and Stan the Doorman. My mother made friends with a part time worker, Christine and they remained friends for donkey’s years after they left the Elite.

I worked at ABC Wimbledon in the mid 70’s as Asst Manager & the great Sid Deekes was still there then as chief projectionist but he finally retired while I was there. Also if you weren’t aware the old place was haunted.Apparently it was built on the the site of an old medieval graveyard & also a former projectionist hung himself backstage in the 1920’s I believe.

I do not recall my mother mentioning Sid Deekes. However, if he retired from the Elite in the 1970’s, earning the accolade, “great,” it is conceivable that he worked there in the late fifties when my mother was there.

I remember mother telling me that when she reported for work one day she found the manager, Mr. Riddeford, most distressed and very upset. The screen had been slashed and it would take ABC’s Head Office two days to instal a new screen. My mother suggested that she could sew the screen, pulling together the damaged fabric, but did not know if it would be possible to show films on it. Mr Riddeford rang Head Office and reported, “One of my girls says she can sew the screen,” to which they responded, “Excellent, we won’t have to close, ask the girl to be in your office in ten minutes so we can phone back and thank her.” I suspect that employers were probably more appreciative of workers in those days than they are nowadays. Apparently, the films did not look too bad when shown on the damaged screen. ABC gave my mother an extra two complimentary cinema tickets for her trouble.

I have never heard mention of ghosts or the suicide of a projectionist in the 1920’s- interesting. My mother was very happy at the Elite and I think she would have enjoyed seeing this website with its comments.

Hi there Read with interest your comments on the Abc wimbledon. yes indeed it was haunted as a kid i used to spend many a night in the cinema with my father Sid Deekes.Many a tale to be told regarding that cinema. great days though. Eddie Deekes.

Ha, I heard of the demolition of this cinema whilst on a visit elsewhere with the CTA. Several of us rushed around there and started rooting around for souvenirs. I was glad I was not alone as there were doors banging at the top of the “built-on” side stairs passage and this was spooking me out a bit. I remember one chap taking a large squarish clock off the back circle wall but the demo men had had the best bits. One of the more unusual aspects was a staircase on the top floor that led nowhere! That part of the building never materialised. Happy days….