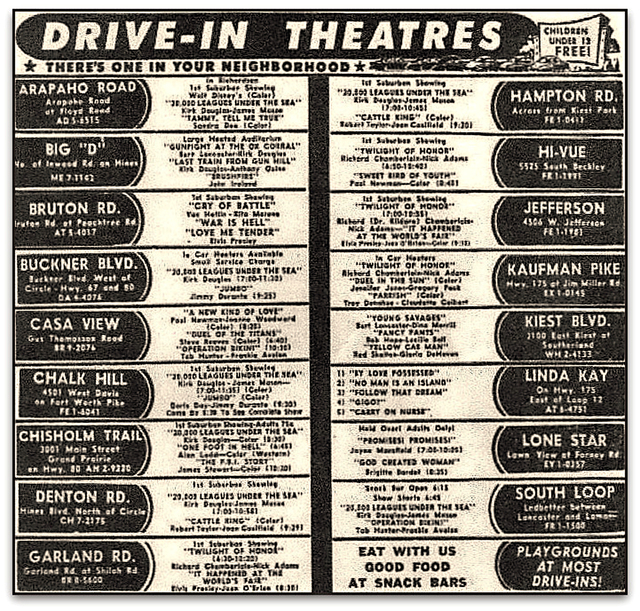 The Chisholm Trail Drive-In was opened May 21, 1959 with Fred McMurray in “Forest Rangers” & Joel McCrea in “Wells Fargo”. On March 29, 1965 under new ownership, it was renamed Auto Vista Drive-In and went over to playing Spanish language movies. This last for a year, and in 1966 it was renamed East Main Drive-In, playing English language movies again. It was taken over by McLendon Theatres in late-1966. The East Main Drive-In was closed in 1971.

This drive-in was near the Main Gate of the U.S. Naval Air Station Dallas where I spent some time different years, but I never saw any evidence of the drive-in.

The Chisholm Trail was a trail used to drive cattle in the late 19th century from Texas to the railhead in Kansas. The cattle drive would take 2 months.

I have a DOWNS DRIVE-In in that city in 1956.It parked 400 cars and was owned by Down THEATRES co.

Downs' wouldn’t be an AKA, the aerial shows a empty field in the 1958 view.

In the early ‘70’s, McClendon Theatres took over the drive-in and changed the name to the East Main Drive-In. Later in the '70’s, it became a metal pipe storage facility!

After looking at the historical-aerial shots. The Chisholm Trail Drive In Theatre eventually became the The Twin aka Jefferson Twin..I’m guessing the McClendon Family bought this one, then added another screen & changing the name. Just like they did with the Downs Drive In Theatre. That eventually became the Century 4, then Century 5, after the McClendon Family bought the Downs Drive In..

drivein2001, I think you’re talking about three different Jefferson/SR 180 (the twin highways) drive-ins; the Jefferson Drive-In is the farthest east, in Oak Cliff. It was located on Jefferson Ave. and was always a single-screen, never a twin.

Moving along Jefferson toward Grand Prairie, you then come to the Twin Highways, originally a single-screen between the highways with entrances from either; eventually this one was twinned, giving its name a dual meaning, by simply building another screen/projection room on the lot immediately to the east. After being twinned, this theatre was advertised simply as the Twin Drive-In. It was never (officially, at least) named the Jefferson Twin, though that might have been a local casual reference, i.e. “the Twin on Jefferson.”

Continuing toward Grand Prairie, you then came to the East Main, originally built as the Chisholm Trail.

Finally, considerably farther into town, you’d come to the Century 4, originally built as the single-screen Downs.

The Harvey A. Jordan architected Chisholm Trail Drive-In was named after its owner, Mr. E. Chisholm who announced the project in March of 1959 and had a grand opening on May 21, 1959. The Chisholm Trail was at 3001 East Main Street bounded by railroad tracks and Main Street and getting additional traffic from Jefferson Avenue. Opening first features on the 40' by 80' screen were “Forest Rangers” and “Wells Fargo.” Chisholm veered the theater toward families and children. Competition was just down to the east with the Twin Drive-In and then further down to the east was the Jefferson D.I. Trains would constantly appear to blow through the Chisholm’s drive-in tower with loud noise and rumbling during screenings. The Chisholm struggled and Woodland Hills Mayor Arthur Avnsoe took over the theater in 1962. The theater’s view toward busy E. Main St. and noise and rumblings – not from the trains – but within the cars at the drive-in appears to have unseated the Chisholm.

Attention about a jury trial over the theater’s showing of “Europe in the Raw” on July 16, 1963 caused a chain reaction. Though the drive-in prevailed having not violated the 1961 anti-obscenity act, public furor didn’t subside. Chemline Inc. – operators of the nearby Twin Drive-In – decided to challenge the Constitutionality of the city’s ordinance which drew an overflow audience to the courtroom. A psychiatrist from Austin explained the dangers of screen leakage on drivers. The anti-obscenity act was upheld which gave residents some teeth in the matter. Not one but 15 petitions flowed to Grand Prairie Mayor C.P. Waggoner with over 1,000 signatures about lewd and obscene films showing at the Chisholm in 1964. Facing mounting public relations backlash for public nuisance and causing inattentive driving habits, the Chisholm’s operator had an opportunity.

First, Avnsoe would move to the newly built Country Squire Drive-In just south of Dallas' Redbird Airport on U.S. 67. As for the Chisholm, veteran theater operator J.J. Rodriguez of the Panamericano in Dallas was convinced by businessmen to convert his Spanish language Panamericano Theater to an art house/restaurant/night club called the Festival. This would require the Panamericano to shut down in early 1965 to convert the space. Rodriguez took on the Chisholm in March 1965 to continue his bookings of Spanish Language films. Rebranding the ozoner as the Auto Vista, Rodriguez opened March 29, 1965 with “La Bandida” and “Suenos de Oro.” Rodriguez operated the theater for one season but closed the theater not long after the Festival launched.

Charles Weisenburg added the Auto Vista the next season in his circuit of Weisenburg Theaters. He rebranded the Auto Vista as the East Main Drive-In and switched it back to English language films. Weisenburg dropped the East Main but the McLendon Theater Circuit would take over the East Main shortly thereafter in 1969 hoping to turn it in to a twin screener. McLendon had recently purchased the Downs Drive-In in Grand Prairie and would convert it to the renamed, multi-screen Century Drive-In in 1970. The circuit had also converted the single screen Garland Road Drive-In into the three-screen Apollo Drive-In. McClendon took over the Plano Drive-In retaining its name and converting it to a three-screen operation. McClendon’s ozone portfolio entering the 1970s was the Astro, Apollo, Gemini, Century, and East Main. That didn’t last long for one property and it was the East Main on the chopping block.

The East Main space was tight and McLendon decided to hold off on twinning the theater. As an underachiever for three previous owners, McLendon reduced the theater to discount status playing exploitation double and triple features or third-run major features to an admission price of just 99 cents per carload. The experiment ended in 1971 as McLendon quietly dropped the theater. A look at the theater at historical aerials.com in 1972 shows the first “bite” already removed from the theater with its demolition to follow. Three names, five owners and not much success for the Chisholm Trail /Auto Vista/ East Main in a 12-year period. 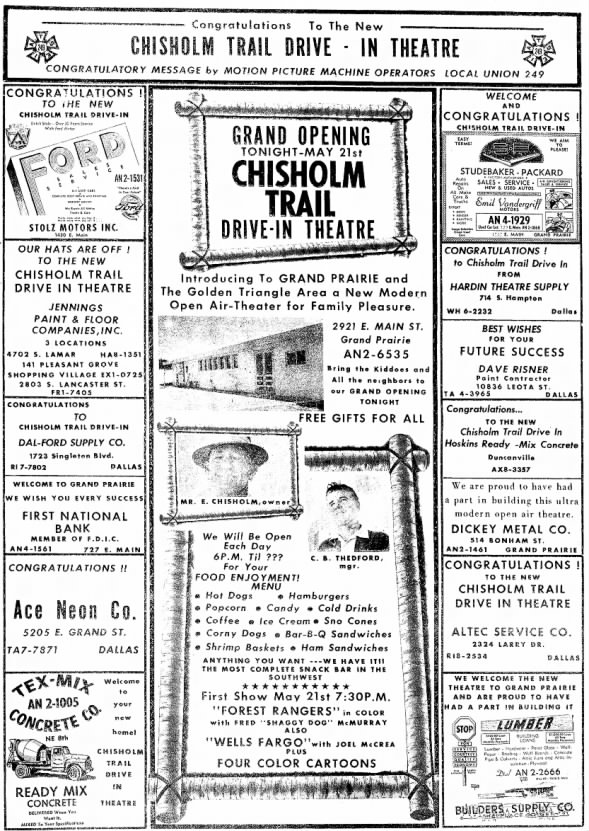 Boxoffice, April 28, 1969: “McLendon Theatres has purchased the East Main Drive-In in Grand Prairie, near the Dallas city limits, and the Downs Drive-In, also in Grand Prairie. Robert M. Hartgrove, president of the McLendon circuit, said that the East Main, purchased from Charles Weisenburg, will be made into a twin airer with 1,500-car capacity and a new concessions area.”