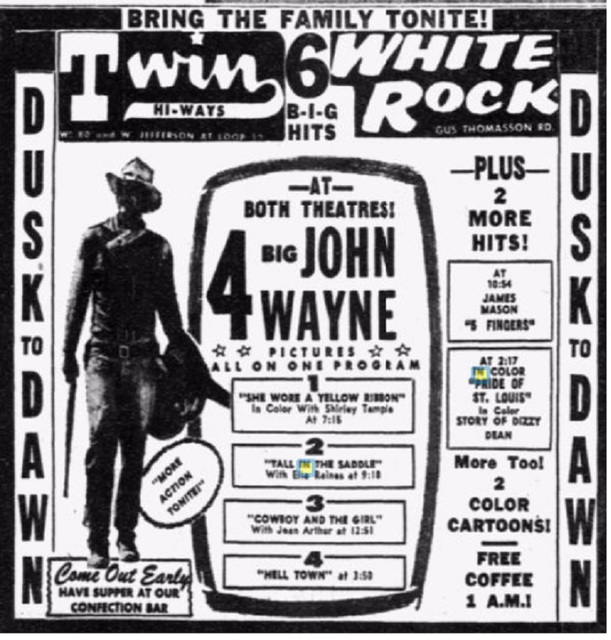 The Twin Hi-Ways Drive-In was named after the two roadways it straddled. It opened as a single screen theatre in June 1955. On July 18, 1958 a second screen was added, and it changed its name to Twin Drive-In. Competition came from the existing Jefferson Drive-In about 2.5 miles to the east, and beginning in 1962 from the Chisholm Trail Drive-In, later renamed Auto Vista Drive-In and then East Main Drive-In located less than two miles to the west.

The Twin Drive-In ran into obscenity clams in 1963/1964, and closed in 1971, soon after two big robberies in November and December of 1970. That times out with the end of a 15-years lease which was likely the End of the Twin Drive-In. (Not to be confusing, but it appears to have ended as a single screen operation, with the east screen tower no longer in use).

The site of the Twin Drive-In is still vacant in the mid-2010’s, and sits across from the Sunset Golf Club in Grand Prairie.

The site is a salvage yard and appears to have been that way since at least 1989. https://goo.gl/maps/Cpkyz

This drive-in was still going in 1971—-I ran PATTON and MASH there in late summer of that year. It probably closed not long after that.

The Twin Hi-Ways Drive-In Theater opened in June 26, 1955 at 4800 E. Main St. in Grand Prairie. with “Duel in the Sun” and “The Long Wait” on its single screen. The Twin confusingly opened as a single-screen theater named after the two roadways that the drive-in was near in Loop 12 and Highway 80. Patrons could enter from Highway 80 / Main St. or Jefferson St.. that bounded both sides of the theater. Because the theater pre-dated the Dallas-Fort Worth Turnpike during its first two years of operation, loads of traffic passed by the theater.

Its competition came from the Jefferson Drive-In about 2.5 miles to the east. In its first years of operation, the Twin played second-run double features. Unlike the Jefferson whose screen was shielded from ongoing cars, the Twin Hi-Ways had its screen facing the highway which led to myriad accidents including fatalities. This was an awful situation that just got worse. Two weeks after the Dallas-Fort Worth Turnpike opened routing traffic to what is now Interstate 30, mother nature spoke. A wind storm knocked the Twin’s theater screen down on September 11, 1957. Unfortunately, the owners doubled down and created a two-screen theater rebuilding the “East Screen” with 750 spots and the new, “West Screen” opening July 18, 1958 with 500 spots. “Peyton Place” opened on East Screen and “God’s Little Acre” with “Across the Bridge to Mexico” inaugurated the West Screen. The theater’s official name was now Twin Drive-In Theatres often referred to as The Twin and both screens carried double-features with newer content on East Screen. Both screens faced Highway 80 making even more unsafe traffic conditions than before. And this nightmarish situation even got worse yet.

In 1959, new competition from the family-oriented Chisholm Trail Drive-In (renamed the Auto Vista and then the East Main) less than two miles to the west. With competition fierce, Chemline, the operators of the Twin. Chemline made a momentous decision late in 1962 to turn East Screen into an adult screen. People too afraid or cheap to buy a ticket parked on the shoulder or in the ditches along Highway 80 and, upon completion of viewing, would pull out slowly onto the highway. Drivers not expecting cars pulling from the shoulder or a ditch and possibly with their eyes on the drive-in screen faced myriad near misses, as well as serious and fatal accidents along the stretch. On December 4, 1962 police seized seven “girlie” films and would charge the operators with a “public showing” of lewd content. The operators were able to previal in a lower court decision as a First Amendment violation and appealed licensing fees as a tax upon the right of free communication. The Chisholm Drive-In would also experiment with adult content doing brisk business with “Europe in the Raw” in 1963 as Chemline’s case proceeded.

In 1964, 15 petitions were handed to Grand Prairie Mayor C.P. Waggoner with over 1,000 signatures. With a public relations disaster on their hands, the theaters went two different directions. The Chisholm operator moved away from Grand Prairie to Dallas and created a new drive-in to show adult fare. A new operator rebranded the Chisholm as the Autovista playing Hispanic-oriented films. The Twin’s Chemline, meanwhile went all in with a court battle drawing an overflow crowd and a psychiatrist from Austin explaining the dangers of screen leakage on drivers and youth, alike. Chemline got a big win and a slight loss in November of 1964 with the case appealed on both counts. On July 6, 1966, Chemline finally lost at the U.S. Fifth Circuit Court of Appeals in the case of Chemline v. City of Grand Prairie. But the four-year battle saw four more years of traffic problems.

Following its loss, the Twin appeared to have taken a low-key philosophy discontinuing show listings and advertising. Hopes to move away from anything other than adult films was challenged when the three-screen Astro moved in less than five miles away in 1968 near Loop 12 and the 303. According to the police blotter, adult films are stolen from the theater’s projection room in 1968 and 1970. Since incomplete reels were taken in the heists, it was apparent that the thieves didn’t want the theater playing adult content more than the thieves wanting incomplete copies of features. The Twin’s East Screen appears to have been retired toward the end of the theater’s run. The entire operation appears to have closed not long after two big robberies in November and December of 1970. That also times out with the end of a 15-year lease which likely was the end of Twin.

The Dallas-Fort Worth Turnpike would become a “free” interstate in 1978 decimating traffic and property values around the Twin in the late 1970s. Today, the Twin’s East Screen has junked cars for an auto salvage yard and the West Screen has returned to vacancy as of the mid-2010s and can be found across from the Sunset Golf Club in Grand Prairie. A year after the Twin closed, its competition to the west – the East Main Drive-In which was playing super low-cost double-feature sub-runs and triple-feature sub-sub or exploitation runs (former Chisholm / former Autovista) closed after the 1971 season leaving just the Jefferson Drive-In along this stretch. The Jefferson would operate until 1990 with the Astro going all the way to 1998.