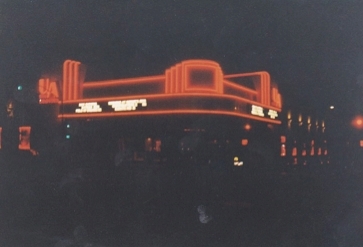 This theater was converted to an H&M where the auditoriums were, and a Tiffanys where the lobby was.

Could use more info and photos!

great theatre i went to a lot of test screenings there

The architect of the Marketplace 6 was Daniel T. Uesugi, of San Francisco-based Uesugi Associates. The firm designed several projects for the United Artists circuit.

Current Google Street View shows that the building has been remodeled in a retroish style all too characteristic of Pasadena in the early 21st century. I only ever saw the original building during the early stage of construction, but photos of it show that, as originally completed to Daniel Uesugi’s design, this was a Neo-Vintage/Streamline style theater. I think the original design made a better contribution to the streetscape than does the boxy thing the building has become, Tiffany’s or not.

There are four photos at CinemaTour showing the original look. The lobby wasn’t all that impressive, but the facade was nice.

I worked there for two year from 1987-1989 under Jeff Little. He promoted to me supervisor / asst mgr within 6 months of starting there as an usher. It was my first job out of high school and I was blown away by that place. In 1988 I got a decent 35mm camera and took a number of photos of my co-workers/ friends at the time (some whom I am still in touch with this very day). I clearly remember the layout of that theatre and have fond memories of running the projector upstairs though I never touched the 70mm projector that they had in theatre 4. The projection booth was a giant “t-shape” room so you can easily move from one projector to another with no need of going through doors. I started working there af the 1987 Whittier quake and there was a crack in the ceiling above the candy booth in the center of the lobby that never got fixed.

I am writing an article for Hometown Pasadena about some of Pasadena’s old movie theaters. Would anyone be willing to share their pictures/memories of the UA with me? Please email me at:

Here is a previous article, to give an idea of what the piece will look like: http://hometown-pasadena.com/history/ghost-theaters-on-colorado-blvd-part-1-of-2/29654

I worked here back in 87 as an usher. The most interesting thing I remember was that on Friday/Saturday nights the pre-show music would culminate with the theme to “2001: A Space Odyssey”. As soon as it concluded the curtains would part and the show would begin … It never failed to get applause from the audience.