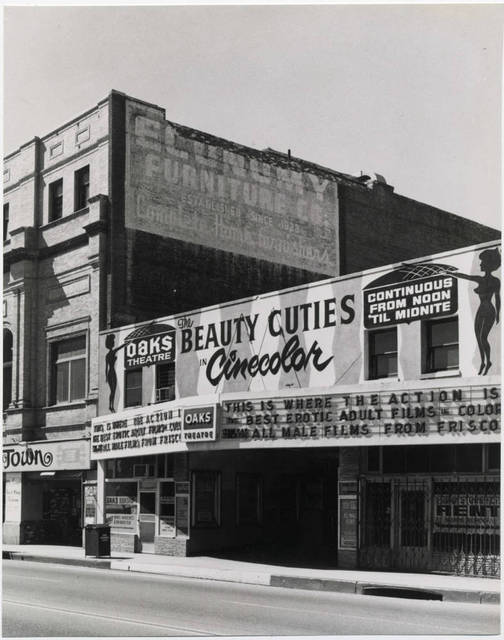 Fisher’s Theatre was opened prior to 1910. By the 1920’s it had been renamed Savoy Theatre. In 1925 it was remodeled by Pasadena architect Walter C. Folland and became the Fair Oaks Theatre. In the late-1940’s it was renamed Oaks Theatre. In later years it operated as an adult theatre.

The Oaks Theatre was demolished in the late-1970’s. This was one of many lost Pasadena movie houses.

I, too, remember the Oaks as an “Adult” theater. I remember going by one day in 1960 or 1961 and seeing the title movie “Look Ma, no Bra!” playing with “Nudie Cuties”. It was quite scandalous back then, laughable now.

In the old photo, and in the old drawing of the theater, the small cafe in the left of your computer monitor screen was owned/operated by my mom and dad from about 1949/50 until roughly 1962/63. It was called Bee Jee’s Malt Shop all that time (named after me). Mr. Wenzler was our landlord and family friend for all that time, and for the first few of those years the Oak’s ran second/third run general audience double features + cartoons + newsreels + live Keno on some weekends during some of those years. My mom and dad just ran the malt shop for bread-and-butter, but were both professional dance/drama/Music teachers and performers….as was I. For a couple of summers, we even put on a live stage show on Friday nights on the stage of the Oaks. Got to hand it to Mr. Wenzler, he tried everything possible to keep the place afloat, even running Mexican feature films for about a year, prior to going to the “art” genre'.

He was a great student of constitutional law, and fought hard for his theater.

He always dressed “To The Nines” with custom tailored suits, and great Hamburg hats. A man of great style, slightly stout, but with great posture and swag, and always the cigar….lit or not…..was with him everywhere he went. Kind of a dying breed that one saw in films of the 1940s-50s era. Loved him dearly, like an uncle, and his son Harold Jr. was a school buddy and personal friend of mine, and he lives now in Mesquite NV.

“The Savoy Theatre [Oaks Theatre] on North Fair Oaks was rather a small movie theater. It had a stage, which contained the screen, but it didn’t have any backstage — just enough room to put a play on. If you were a member of the cast and you wanted to get from left stage to right stage, you had to go out in the alley. If it was raining, that was just too bad.” – Arthur Raymond, Talking About Pasadena: Selections From Oral Histories, 1986

As the quote matnhornmann cited indicates that this theater already existed and the Pasadena Playhouse took it over, we know that it probably dates from the 1910s or earlier. I’ve come across a reference to a house called Fisher’s Theatre on North Fair Oaks Avenue in Pasadena, operating in 1912. There is no address for it, but I wonder if it was the same house as the Oaks? The June 15, 1912 issue of Southwest Contractor & Manufacturer said this:

“ALTERATIONS—Archts. Buchanan & Brockway, 65 N. Raymond Ave., are preparing plans for remodeling Fisher’s theater on N. Fair Oaks Ave. to conform with the building ordinance. The work will consist of installing an automatic sprinkler system. fire doors, brick wall between the stage and auditorium, and changes in the wiring system. Cost about $2500.”

If Fisher’s Theatre was not the same house that later became the Oaks, then there had to have been another theater on North Fair Oaks Avenue, but I’ve never heard of any others being there.

I found a later item in Southwest Contractor & Manufacturer that gave the address of the 1912 theater project in Pasadena as 87 N. Fair Oaks. As the Oaks was at the corner of Holly Street, there wouldn’t have been room for another theater next to it, so 87 N. Fair Oaks must have been its address in 1912. Fisher’s Theatre was reported in insurance industry publications of the period as having suffered a fire on January 5, 1911, so it must have opened in 1910 at the latest.

Harold Wenzler SR. Is my grandfather. I remember the cigars the house he had. I stayed there one summer. It was like a mantion to me. Lol

On February 9th 1977 my father Harold Wenzler passed from this earth and it’s so nice to know that his life was not one that was lived in vain. it’s also nice to know that he is not just remembered as the man who showed dirty pictures. I’d like to say thank you to all the people who have made comments in regards to my father and his theater on this site.My father was quite a character larger than life and I’m in the process of putting together his life story. I would love to hear from people who knew my father might have stories or photos to share.

I was a member of the dance troupe that Bee Gee’s parents had. Bee Gee and I went to private school together, Miss Brown’s on north Cypress. My step father worked at Chicago Outfitting which was in the same block as the Fair Oaks. I would sometimes help Bee Gee’s father at lunch, he was a very sweet man and it was a lot of fun. Hi Bee Gee.