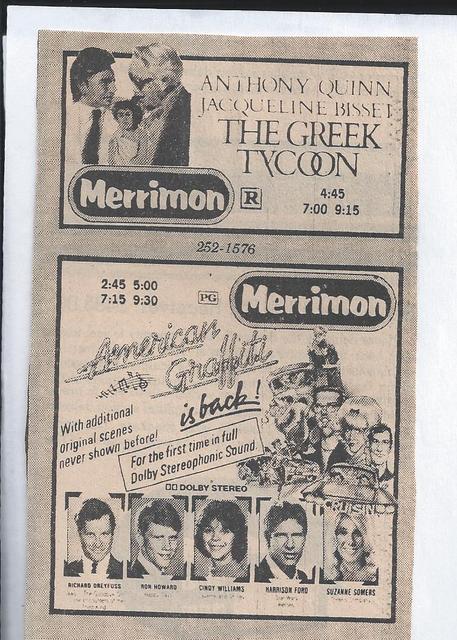 The Merrimon Twin Theatre was a very popular twin theatre in Western North Carolina. It was operated by Irvin-Fuller Theatres, who operated many screens in the Carolinas.

The Merrimon Twin Theatre opened"Jaws" to huge crowds making the biggest grosser for that Twin Theatre. Other long running movies that played there include "The Electric Horseman", "The Jerk" "Conan" and "Rocky III" for the first couple of weeks it looked like "Jaws" was back, with huge crowds attending. One thing I never could understand is that while all the other screens would have matinees daily on Mondays all of the Irwin-Fuller Theatres would not. Maybe someone knows why?

The Merrrimon Twin Theatre was a major player on Asheville until UA opened the first big multi-plex and like so many other cities the moviegoer that had supported the Merrimon headed to the Mall!

It became the Two Moons Brew and View in 1998, and in 1999 it was renamed the Asheville Pizza & Brewing Co.

Not to mention the original STAR WARS played here as well at the Merrimon…breaking all boxoffice attendance records and became the highest grossing film for that theatre……..

Information above needs to be corrected. It is not a twin it is a single screen theater and it has been open ever since I moved here which was 2004.It was a twin when it was the Merrimon Twin

Chuck and Mike. This article is about the former “Merrimon Twin” which existed at this same location years ago. That theater closed down. A different theater/business opened later under the name “Two Moons Brew and View” in 1998. The current Asheville Pizza & Brewing Co is the third theater to open there. If you want to start a separate entry for AP&B, feel free. This entry is for the former Merrimon Twin.

I agree Chuck. It’s the same as what used to be Lowes Astor PLaza in nYC is now under the Best Buy theater showing aka

Honestly, I don’t really care. Name it as you wish.

Informtaion needs to be updated this is a single screen theater not a twin.

Also, per first comment by Arx on November 30, 2012, we’re missing the aka Two Moons Brew and View. The last line of the description also needs to be changed. Beerinator says that Two Moons opened in 1998 and changed its name to Asheville Pizza & Brewing Co. in 1999. Pubcrawler still has this page, placing Two Moons at the theater’s address, and the earliest customer review dates from October, 1998. This theater has been a movie and beer joint for about fifteen years.

I have the original ads for the grand opening of the Merrimon Twin Theatre from December 21,1973.