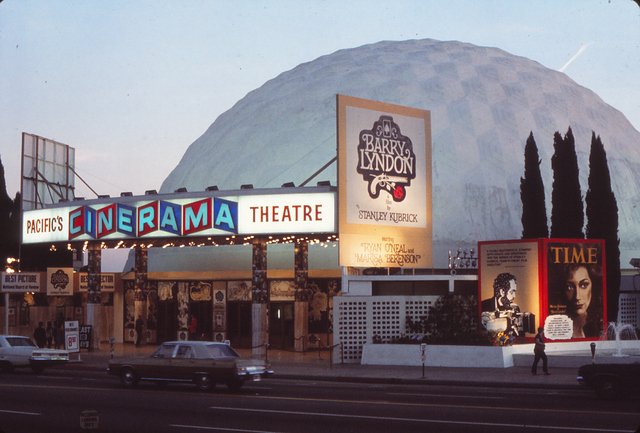 A geodesic dome built for the Cinerama format, this mini-Epcot like structure is a wonder of 1960’s showmanship. Featuring an enormous curved screen and ample seating underneath the large dome, the Cinerama Dome is famous for blending first run films with the occasional revival classic. The Cinerama Dome opened November 7, 1963 with 937 seats and the World Premiere in 70mm of “Its a Mad, Mad, Mad, Mad World”. Additional 70mm films included the West Coast premiere of “The Greatest Story Ever Told” on February 17, 1965, the World Premiere of “The Battle of the Bulge” on December 16, 1965 and the World Premiere of “Ice Station Zebra” on October 23, 1968. In 1999, The Dome exhibited an exclusive week long showing of the original “Blade Runner” answer print.

The Cinerama Dome and ArcLight Hollywood was closed on March 17, 2020 due to the Covid-19 pandemic. It was announced on April 13, 2021 that the closure would be permanent in all ArcLight/Pacific Theatres.

Just scrolled through the lot of them Cinerama- thanks for taking the time to post them.

theatre no longer boarded up per: https://la.eater.com/2021/7/29/22600105/am-intel-morning-news-arclight-reopening-hollywood-rumor-update

Interesting how “2001” didn’t play at the Dome until July 1974. Many people assume it played there in its initial release in 1968.

If your’re a true fan of cinema and the Cinerama Dome, do yourself a favor & check out Cinerama’s exceptional Cinerama Dome page at https://incinerama.com/ctdome.htm. Insightful articles, pictures & tons of ads for nearly every film that played there since 1963, in order.

I love how they were already promoting the “Its A Mad, Mad, Mad, Mad World” premiere before they even broke ground on the Dome. And that it was basically announced, built & opened in the span of seven months under a 24-hour-a-day schedule. Crazy.

the date on the application is 12/16/21 and the notice claims “license exchange” to a DT Operator LLC. DT is a firm based in Delaware based on an line search.

There was no timetable for a potential reopening date, although one source who was not authorized to comment publicly said it could be as early as next year.

The owner of the iconic venue, Decurion Corp., could not be reached for comment.

A public notice of application to sell alcoholic beverages was placed outside the dome Thursday, under the name DT Operator LLC. DT Operator is a holding company for Decurion Corporation.

Records from the California Department of Alcoholic Beverage Control show multiple permit applications were placed on Nov. 22, including permits for catering, a portable bar, events and a “general eating place.” All permits were still pending as of Friday.

The dome has been closed since the start of the pandemic. On April 12 of this year, Pacific Theatres announced it would not reopen the historic venue, or its other theaters, due to financial pressures caused by the pandemic.

“After shutting our doors more than a year ago, today we must share the difficult and sad news that Pacific will not be reopening its ArcLight Cinemas and Pacific Theatres locations,” Pacific Theatres said in a statement. “This was not the outcome anyone wanted, but despite a huge effort that exhausted all potential options, the company does not have a viable way forward.”

Calls to save the Hollywood ArcLight were loud and long. AMC Entertainment previously said it was interested in buying cinema locations formerly operated by ArcLight Cinemas and Pacific Theatres. A spokesperson for the chain said Friday that AMC was not involved with the reopening.

The Cinerama Dome first opened in 1963. The venue survived a demolition scare in 1998, when a proposal by Pacific Theatres would have stripped the dome and replaced it with restaurants and a movie multiplex. However, fierce public opposition overpowered the effort and Pacific Theatres agreed to keep the location intact.

“There’s a reason every movie lover in L.A. is in mourning,” filmmaker Rian Johnson told The Times in April.

“If you lived in this town and loved movies, you’ve had life changing experiences in that complex,” Johnson said via email. “But more than that, it’s easy to forget how the ArcLight completely transformed the moviegoing experience: assigned seating, plush comfy chairs, no late entry to screenings, these were all considered wild and crazy ideas when they first opened. The ArcLight loved and respected movies, and you felt that from every person who worked there. This is a huge, huge loss.”

According to the linked article, re-opening date is unknown. Refurbishment at planning stage.