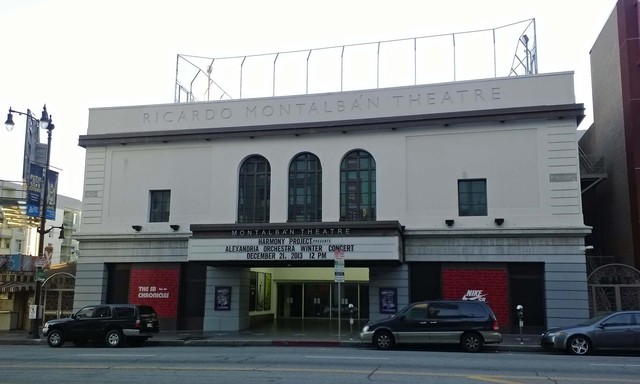 This splendid Beaux Arts live-performance theater was built in 1926-1927. The premier performance was “An American Tragedy” by Theodore Dreiser on January 19, 1927. Actor Edward Everett Horton starred in many productions at the theater between 1928 and January 1929. The theater also had a memorable run of the play “Philadelphia” during its early years. The theater features orchestra, mezzanine, loge and balcony seating.

During the depression of the 1930’s, the theater was taken over by the Hughes-Franklin chain and renamed Mirror Theatre, going over to screening movies on March 13, 1931 with Constance Bennett in “Sin Takes a Holiday” & Charlie Chase in the comedy short “So Quiet on the Canine Front”. It was renamed International Mirror Theatre in 1933. In 1936 it was purchased by the Columbia Broadcasting (CBS) for local affiliate KNX radio and was used as a live performance radio auditorium and local radio station. Known as the Studio Theatre, where Cecille B. DeMille hosted and introduced stars such as Gloria Swanson & George Raft in “The Lux Radio Theatre” shows. The theatre was modernised at this time to the plans of noted theatre architect Simeon Charles Lee who added a dazzling neon lit marquee. In 1938 it was renamed CBS Radio Playhouse.

In 1954, Mr. Huntington Hartford, Atlantic and Pacific Company heir and millionaire, bought the building for $200,000 from Columbia Broadcasting and extensively remodelled and “modernized” the theater at an additional cost of $750,000. He streamlined the building from the facade, to the lobby and through the auditiorium. The new design was created by a famed “decorator to the stars” named Helen Conway, who gave it a “fashionable” look popular at the time.

The re-design included a second floor mezzanine bar that served spirits and advertised as the first such feature in any live theater. The facade featured white Vermont Marble in mid-century modern design. The lobby contrasted with black and silver carpet, specially loomed for the floors. The auditorium doors were black teak wood with gold fittings. The large auditorium had gray-green walls with black pilasters rising from either side of the stage. KTLA television did a live opening broadcast as 2,000 people lined Vine Street to see the stars arrive at the gala opening of the Huntington Hartford Theatre in September 1954. The opening performance was Helen Hayes in “What Every Woman Knows”. Hartford ran the theater successfully for ten years. On December 18, 1962 the theatre screened its first movie since 1936 when the west coast premiere of “Long Days Journey into Night” starring Katherine Hepburn & Ralph Richardson was screened.

In 1964 Huntington Hartford sold the theater to James Doolittle (owner of the Greek Theater in the Hollywood Hills) for $850,000. Cary Grant had tried to buy the building, but lost over Doolittle. The theater was (not surprisingly) renamed the Doolittle Theater.

Eventually, the theater would run down into disrepair. Until bought in 2000 by the U.C.L.A. performing arts group “Nosotros”, an organization founded in 1970 by actor Ricardo Montalban “to help fulfill the goals of persons of Spanish-speaking origin in the motion picture and television industry”. Nosotros means “us” in Spanish and they wish to improve the image of people of Spanish-speaking origin as they are portrayed on the screen, help their members seek employment opportunities in the entertainment industry and to train them by offering theatre workshops and theatre productions they can be a part of. The founding board included members Desi Arnaz, Vicki Carr and Anthony Quinn.

The theater was reopened in May, 2004 and was renamed the Ricardo Montalban Theater and was remodelled to appear more as it did when it was built in 1926. It’s Beaux-Arts exterior has been carefully recreated in the first phase of the project and the interior work followed. It was renamed Montalban Theatre. In 2015 the open-air Rooftop Movies at the Montalban opened screening classic movies.

This theater is often mistaken for other Hollywood theaters, most often with the Hollywood Playhouse at 1735 Vine Street, which in the 1960’s became famous as the Hollywood Palace TV show venue. That theater still stands one block to the north. The Ricardo Montalban Theater has even been confused with the former Jerry Lewis Theater and the El Capitan Theater, which are blocks away.

@Joe Vogel – Just checked it out on Google Earth and it looks like the theater was bowled at some point and replaced by a new building. I wonder what happened to the imprint of a salami on the sidewalk outside the stage entrance?

Bob Feigel: Yes, the Filmarte is gone. The building now on the Filmarte’s’s site was erected in 1993. I don’t know what became of the salami imprint.

This is beautiful history to read :)Thanks for all the effort and detail

Thanks to everyone who responded to my posts and filled in the gaps. Cheers, Bob

The Mexico Film Festival was held May 19-25, 2011 at the Montalban and enjoyed huge attendance including several sellouts. I snared an $80 all access pass for $40 in a one-day promo on the L A Weekly website and saw nine films.

Milagro Tequila had a free drink and punch bar which I enjoyed. A number of Mexican actors and talent attended and it was refreshing to see a better dressed and younger crowd-about 95% Latino-than you see at other film festivals. The concession prices were quite reasonable: $2 for candy bars, bags of cashews, soft drinks, etc. Beer and wine were also available.

I am not Hispanic and my subpar Spanish hindered me in getting much out of the Q & As, mostly in Spanish. All films had English subtitles, except for one picture
sent to the festival in error with English titles.

I am wondering if it is possible to get a copy of this photo? My friend is interested in owning a copy. Thank you! Anita

Great to see this theater is still operating. I worked the stage door when it was still the Huntington-Hartford Theater and later the James A. Doolittle Theater. Great plays and terrific people who came backstage to visit the performers. Visitors included Helen Hayes, Barbara Stanwyck, Natalie Wood, Walter Matthau, Jane Fonda and a very shy Tom Hanks.

1954 photo of the Intermission Bar at the Huntington Hartford Theater added via John A. Harris.

As far as I know, the only movie shown at the Huntington Hartford during the ten years (1954-1964) the house had that name was Ely Landau’s production of Eugene O'Neill’s Long Day’s Journey Into Night, which had its west coast premier there on December 18, 1962. The movie had a fairly long run at the Hartford, but I believe the house went back to stage productions after it ended.