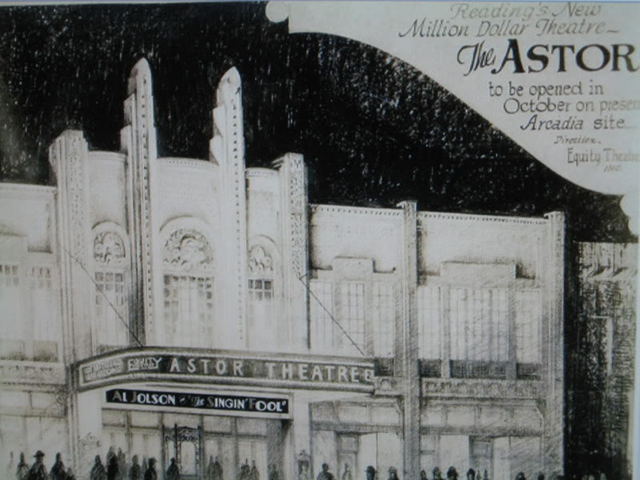 The Bijou Theater was a burlesque theatre which opened prior to 1905. It was renamed Palace Theater in 1910. It became a movie theatre on June 26, 1916, reopening as the New Arcadia Theater. The Arcadia Theater was demolished in 1928 and the Astor Theatre was built on the site.

FDY must have meant Penn Street, rather than Pennsylvania Street, since Penn Street is where the local commenters on the Park Theatre page (MikelD and JimmiB) place it. But it wasn’t the Victor in any case. I suppose it still might have once been the Princess/Arcadia, though.

I’m certain that that is the same site as the Astor. I see that one of the owners of the Arcadia is listed as Carr and Schad. They were the owners of the Astor and Strand.
Before my time there was a theatre in the 100 block of North 5th Street. The building may still be there, on the east side of the street a few doors up from the Berkshire Hotel building. I believe at one time someone told me that it was the Arcadia.
If the address is correct for the Victor, it definately is the same address as the Astor, and I see the Victor was also built by Carr and Schad.
As far as the Ritz goes, I don’t remember any theatre building in the 800 block of Penn St. Maybe 719?

Guess I must be wrong about the Ritz. I found a photo in my files of Penn St. looking west from 8th Street. It shows the Astor, Warner, Embassy and Loews Colonial, but I don’t see anything else that looks like a theatre in the 800 block.
View link

Here’s a 1919 ad from the Arcadia looking to by used equipment, but they don’t give an address. It’s the 4th post down under “Business Opportunities”.
View link

An article in the September 9, 1937, issue of the Reading Times says that the old Bijou Theatre, a burlesque house at 734 Penn Street, was renamed the Palace in 1910. In 1916 it was taken over by Carr & Schad and completely remodeled, reopening on June 26 as the New Arcadia Theatre.

The Bijou was in operation prior to 1905, so even with Carr & Schad’s remodeling of 1916 the house was probably quite ready for replacement when it was demolished in 1928 to make way for the new Astor Theatre.

The June 26, 1916, issue of the Reading Times rhapsodized about the pleasures awaiting the public at the opening that afternoon of the Arcadia Theatre:

“The Arcadia, Reading’s latest and largest photoplay theatre, is to be opened auspiciously Monday afternoon under the management of Carr & Schad, Inc., and an anxiously waiting public will marvel at the remarkable transformation of the well-known site, which is one of the best established theatrical spots in this community. So much has been said about the Arcadia, with its delicate decorations, designed by one of America’s leading theatrical artists, its lighting effects, the big screen in a setting planned and set by the head stage director of the Keith circuit, that words fail to do justice to the magnificent interior, and when the audiences are ushered into the Arcadia, they will almost think it impossible that such a decided change could be made in so short a period, the theatre being closed but seven weeks. The entrance at 734 and 736 Penn street is the only mark that will suggest or recall the days of the former theatre. Carr & Schad, Inc., pioneers in the local motion picture Industry, have always endeavored to give the public the best available service and the Arcadia is to present only a brilliant array of program features that will appeal to all classes of photoplay followers.”

There followed a very long, and equally effusive, preview of the Arcadia’s opening attractions, with much of it devoted to Bille Burke, star of the serial Gloria’s Romance, the first chapter of which was to be part of the program.

Reading’s original Bijou Theatre was destroyed by a fire in the spring of 1900. The opening of the new Bijou Theatre was reported in the January 8, 1901, issue of the Reading News-Times. The auditorium was on Cherry Street, and access from Penn Street was via a new lobby through an existing building called Keystone Hall

The Bijou Theatre launched February 1, 1900 with Hartzell’s Circus Royal performing on the stage. On February 28, 1910, it became the Palace Theatre.

After becoming the Arcadia Theatre, its claim to fame was Reading’s first converted to sound location with Warner Bros. Vitaphone system on February 21, 1927 with “Don Juan.” The audiences were greater than expected and the Vitaphone system would be moved to the larger Strand Theatre the following year; the Arcadia was demolished to make an even bigger venue in the Astor Theatre.