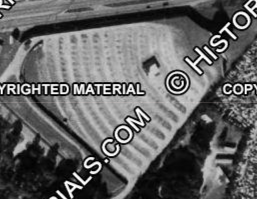 One of four drive ins in Albany, Georgia. The Georgia Drive-In parked 419 making it Albany’s largest drive-in. It was opened by 1951 when it was operated by Adolph Gortatowsky and he was still the operator in 1955. It was owned locally like all the Albany screens were by Albany Drive-In Inc.

It was later operated by Martin Theatres. It was closed in the mid-1970’s and was demolished by the late-1970’s.

Bob, Checked a 1973 Albany Newspaper no GEORGIA DRIVE -in Listed only the Slappey Drive-in.It must have closed way before 1975.

it was blown down in a storm sometime in the early seventies, and replaced with a twin inside theater. i am 99% certain the georgia drive-in was operating before 1967. it was in east albany, at an intersection known as Five Points. it had an old style screen that had an interior and scaffolding, perhaps so the screen tiles could be serviced. my friends and i would sneek in, climb the internal scaffolding to catch pigeons. did this a few times WHILE the movies were playing. awesome!

Aprrox. address for this drive-in was 100 Old Johnson Rd.

The theater appears that it was closed in the mid-1970s and later demolished sometime in the late 1970s.