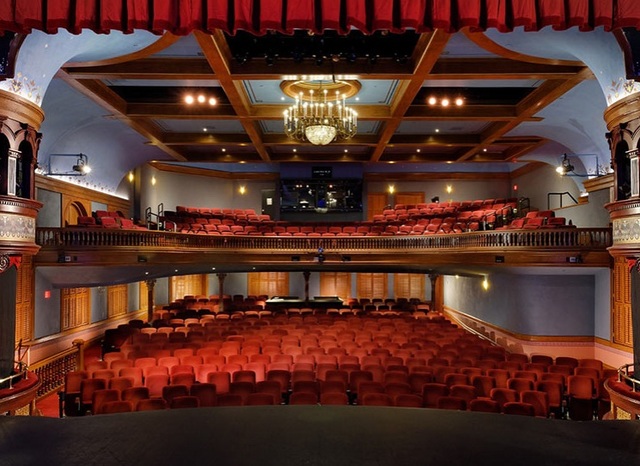 A very beautiful opera house in the trendy, yet historic, Colorado mountain town of Aspen. The Wheeler Opera House opened on April 23, 1889. It has had an arthouse film series since the 1960’s and may have shown films prior to its first closure in 1918.

It features a beautiful renovation that remains true to its original design. I am not well versed in the theater’s history and would be doing nothing more than a cut and past job of the history page on the WOH’s website so I will leave further historical comments to other Cinema Treasures users who know more than I do.

The booth contains two Norelco 35/70 machines (runs both 2k and 6k reel changeover) and is still fully capable of running 70mm and magnetic sound. The theater is also equipped with digital projection. This is all carried out via a very unique booth in the middle of the balcony.

I enjoyed going to the website clicking on About Wheeler and clicking on History and read the whole history of Aspen and the theater, found it interesting.

Here are some pics recently posted on Cinematour: http://www.cinematour.com/tour/us/1685.html

The Wheeler Opera House in Aspen is listed in the 1897-98 edition of the Julius Cahn Official Theatrical Guide. J.J. Ryan was the Mgr. The house had 625 seats, electric illumination and was located on the second floor. The proscenium opening was 24 feet wide X 18 feet high, and the stage was 30 feet deep. There were 6 musicians in the house orchestra. Local newspapers were the Times, Tribune, and Rocky Mountain General Chronical. Hotels for show folk were the Jerome, Clarendon and Lincoln. Railroad was the Denver & Rio Grande. The 1897 population of Aspen was 5,000.

Harry Edbrooke was not the architect of the Wheeler Opera House. He was only 16 years old when it was built. It was actually designed by his father, Willoughby J. Edbrooke. Construction was probably supervised by W.J.’s brother, Frank E. Edbrooke, who performed that office for the Tabor Grand Opera House in Denver and later established his own practice in Denver.