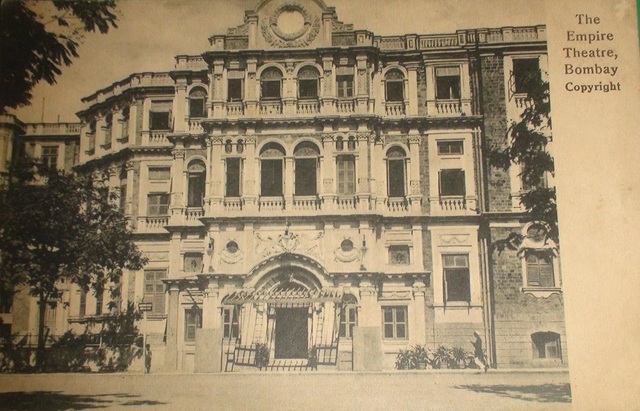 The Empire Theatre was designed in a Baroque style by architect Arthur Payne, with internal decorations by the local firm O'Connor & Gerald. It opened as a live theatre on 21st February 1908. Seating was provided for 1,000, in orchestra stalls, circle & gallery levels, and there were also boxes with additional seating. It had a large fully equipped stage. There was a domed ceiling, and it was said to be the first theatre in Asia to be constructed with a cantilevered balcony.

Films were being screened from 1920, alternating with live shows, and by the 1930’s, it was converted into a full time cinema. It was re-named New Empire Cinema in 1937.

It was re-modelled in 1948 by British architect M.A. Riddley Abbott, who gave it the splendid Art Deco style seen today. The New Empire Cinema was taken over by 20th Century Fox Corp. in 1955 and was the Bombay showcase cinema for their films.

Renovation was carried out in 1996, and the cinema was returned to its former glory, with the interior being one of the finest Art Deco style interiors in Mumbai. The New Empire Cinema screens first run Western films, dubbed into Hindi, and East Indian films. To make the single screen cinema viable, three or four different films are screened each day.