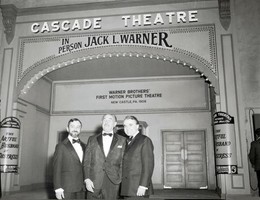 Located in the heart of the New Castle, PA, downtown, The Cascade Picture Palace was the first theatre operated by the Warner Brothers. Well, almost. Actually, they began showing movies in the back room of a funeral parlor further along E. Washington Street. 50 or so folding chairs were set up and the single, hand-crank projector spooled out 7 minute novelty films on a 7 foot glass mirror.

The Warner’s lived in nearby Youngstown, OH and had earned some money with a primitive projector and portable screen and a tent. They moved from town to town showing brief films were ever they could attract an audience willing to view the new miracle. Pittsburgh, New Castle and Youngstown were burgeoning industrial centers at the time and, by 1903, any one of the three could have eventually grown into a major city.

The Warner’s found a sizable audience in New Castle with no competition. Pittsburgh’s Nickelodeon (the world’s first), was open and thriving. The movie theatre/funeral home was successful for more than two years. At various points it was called the Bijou (little gem) and the Pioneer. Several other store-front cinemas had popped up along Washington Street, including the Dome, Nixon, Star and Park Theatres. Not to be outdone, the Warner’s opened the Cascade Movie Palace a few doors down from the funeral home on February 2, 1907.

The Cascade Picture Palace featured real theatre seats and a permanent screen. The hand-crank projector displayed 7 minute episodes of the newly emerging feature films. Because the projectionist had to change reels every few minutes, each reel was advertised as ‘A Drama in 8 Acts’, or the like.

Time moved on and so did the Warner Brothers. Harry Warner moved to New York to handle their ever growing chain of palatial theatres and Jack Warner to Hollywood to produce films and establish the WB studio.

According to, now long gone, New Castle operators, the Warner’s wanted to build a fabulous theatre in New Castle to commemorate the start of their empire. As rumor goes, when word got out, the price of the land sky-rocketed. The plan for New Castle was abandoned and a theatre was built instead in Youngstown. The Warner Theatre/Powers Auditorium still stands and is home to the Youngstown Symphony Orchestra.

The site of the Cascade Picture Palace eventually became a Neisner 5 & 10 store and offices. In recent years a non-profit group has purchased this and other buildings in an attempt to create a memorial to the Warner Brothers. All that has seemed to evolve to date is a second floor, upscale restaurant which recently closed and a reproduction of the front of the Cascade Picture Palace in the buildings main lobby. The display includes an old seat and an equally old, but probably not from the Cascade, projector, complete with (sigh) CinemaScope lens. It would truly be nice to see a real Warner theatre opened as a tourist and historical commemorative.

The Cascade Picture Palace should have it’s description changed to show 2 screens instead of one with a total seating capacity of 200. As noted above, the original Warner Brothers theatre had a nickelodeon side, with 100 seats, bare-bones decor and folding chairs. The “Gentry” side, also with 100 seats, cost a quarter and sported plush seats and a fancy decor for “more sophisticated patrons.” In addition to being the WB first theatre, one might speculate if this was not also the world’s first twin theatre.

Jack, whether the Cascade has a shot at having been the first twin theater or not depends on now early in 1907 it opened. The Twin Theatre in Atlanta, Georgia, opened in February, 1907. It’s the earliest two-screen house I’ve come across so far, but there might have been earlier ones. As many early movie theaters were located in converted store buildings, and the larger of those were often divided by supporting columns, the idea of partitioning the space into two rooms could have occurred to a number of theater operators.

Thanks Joe! The Cascade opened on February 2nd, 1907. So, the Cascade and Twin in Atlanta apparently share the “official” honors. It’s amazing how many wonderful tidbits of theatre history are out there.

The Warnere Film Center / Cascade Picture Palace Theatre is now on Facebook and Twitter in addition to the website: www.warnerfilmcenter.org. Everyone is invited to check out and share these links with other cinema fans.

Here is a question concerning the Warners. In 1907 Sam Warner was involved in the Grand Opera House when it first started showing movies. I do not wish to put too fine a point on the pencle of history, but that combined with the Warner’s Bijou Theatre in Youngstown about the same time should count for something considering the fact that the Warner brothers were heavily involved in Youngstown’s theatrical life.

If you will go yo the Youngstown page, you will find that there were movie theaters here as early as 1906, and as was stated earlier, the Warner brothers were involved in at least the first two to show movies, one of which was the Grand Opera House hardly a store front movie. they were also involved financially in at least three other downtown theaters before building the Warner Theater. Now I do not wish to come off as a snob, or throw cold water on the people of New Castle, but facts are facts … the Warner family was from Youngstown … the family owned businesses in Youngstown … and the brothers were deeply involved in Youngstown’s theater live long before they opened their little theater in New Castle.

I went to the web site www.warnerfilmcenter.org and it has absolutely nothing to do with the Cascade Picture Palace or even movies.

Looks like Warner Film Center let the domain name lapse and it has been taken over by a spam site.

Here is an article that tosses a very wet blanket on the clame that the Warners located their first theater in New Castle.

Warner Bros. BY BRETT ROSENSTEIN / / When people think of Warner Bros., the first words that often come to mind are “Hollywood”, “entertainment”, or maybe “Bugs Bunny”. However, a phrase that should come to mind is “Youngstown, Ohio”. The billion dollar media and entertainment empire actually originated in Youngstown. The Warner brothers (Harry, Sam, Albert, and Jack) moved with their parents to the northeastern Ohio city in 1896. The brothers grew up on the north side of the city and attended Rayen High School in addition to working in their father’s shoe repair and meat market businesses. In the early 1900′s, the Warner Brothers made their grand entrance into the entertainment industry by taking over the city’s Old Grand Opera House, which they used for vaudeville and photoplays. Soon after, Sam Warner purchased a movie projector for $150. He financed the projector by pawning his father’s gold watch and a family horse (with his parents’ consent). He also purchased a copy of the popular film, “The Great Train Robbery“. Sam and the rest of the Warner brothers rented out a storefront in nearby Niles and put on showings of the film. They were so successful, they began opening up theaters around the Mahoning Valley. The brothers left for New York and Hollywood to expand their foothold in the entertainment industry. However, they returned to Youngstown in 1931 to open the “Warner Theater” dedicated to the people of the city and to their brother Sam, who had died in 1927 and was a true visionary in the family business.

After having spent a number of years researching this topic, I thought I would share some information I have learned. Youngstown had 20 moving picture theaters in 1907, so the Warners decided to open their’s in New Castle where there was little to no competition. Their first theatre, the Cascade Theatre, was located at 15 S. Mill in a store front that was once part of the Knox Inn. It opened February 2, 1907. A second theatre opened by the Warner Bros., the Bijou, was located two doors away at 11 S. Mill and opened within 30 days later. It was short lived and was closed by the end of August 1907. A third theatre, the Cascade Vaudeville, was opened by the Warners above the Cascade at 15-17 S. Mill on November 19, 1907. The Warners sold their interests in both theaters in New Castle to Dan Robin’s upon the opening of the vaudeville theater. They left the area in November 1907 to run their distribution business in Pittsburgh and Norfolk. When they were forced out of business by the Edison Trust, they sold it and returned to Youngstown. It was then that they took over the Old Grand in the summer of 1910 for vaudeville and photoplays. Using money from the sale of their distribution business Harry bought his parents a large grocery store at 323 E. Federal. In December 1911 Harry Warner and David Robins (Dan’s brother) built the Rex Theatre at 135 W. Federal Youngstown and used films left over from the distribution business. The Bijou, 4 W. Federal, in Youngstown was originally owned and built by George Olnhausen in 1907. In 1911 the Robins Brothers purchased it from the then owners Paul Fitch and Walter Hanitch. Harry and Dan Robins owned the Lyric for a few years at 277 W. Fed. from at least 1909-1911.The Dome was built by Christopher W. Deibel (as well as four successive theaters also named the Dome). The last one he built was in 1912. (He also owned the Liberty.) David M. Robins had taken over the Dome by 1926 and it was one of three of the first theaters in the US wired for sound in 1928. In 1921 Ben Warner (the boy’s father) was operating the Roma Theatre in Youngstown. Then of course the Warner Theatre opened in Youngstown in 1931.