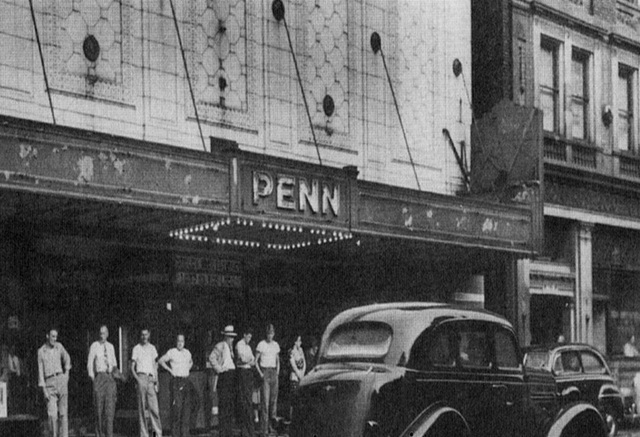 Built by Monarch Theatres in 1929, the same company responsible for the New Castle Capitol Theatre, the Penn Theatre was sold to Gamble Brothers Theatres, operators of the Victor Theatre, in 1945.

The Capitol Theatre burned down in the late-1930’s and the Penn Theatre and Victor Theratre were sold to Pittsburgh-based Associated Theatres in early-1951. The Victor Theatre was closed but the Penn Theatre at 18 N. Mercer Street, downtown, remained open into the 1970’s as the leading first-run theatre in the area.

The stylish red and gold, Art Deco style interior was enhanced by 6 large tiffany-style chandeliers on the auditorium ceiling. Built as a film theatre without a true stage, the proscenium arch and red velvet drape was covered by a wall-to-wall CinemaScope screen in the early-1950’s. Sadly, the Penn Theatre was never wired for stereo sound.

The auditorium was unusual for its day. The 1,138 seating area was divided into two sections. The front half of the auditorium was a traditional, sloped-floor configuration while the back half was raised up in what would be called today, stadium seating. Patrons back in the day referred to this stadium section as the balcony.

The manager of the Penn Theatre from 1951 until it closed in 1968, was Leo A. Mickey, an Ambridge, PA native, who joined Associated Theatres after training with Warner’s. Mr. Mickey became quite a local celebrity and many people still remember his broad smile as he stood on the tiny Penn Theatre stage for his famous kids 17 cartoon Saturday matinees. Mr. Mickey was a true showman in every sense of the word. For many years he was the chairman of the annual Christmas parade. In addition to his duties at the Penn Theatre, Leo Mickey, at one time or another also overlooked the management of several other New Castle theatres including the Hi-Lander, Victor, State, Cinema and Westgate Plaza. Now in his 80’s he is still remembered and respected as the ‘manager’s manager’ by his peers and grateful past-patrons of the area theatres.

The day the wrecking ball hit the side of the Penn Theatre a large crowd assembled to watch. Repeatedly the ball struck the wall with no obvious result. The crowd cheered each time until, after many tries, the ball finally broke through the wall of the venerable, old showplace and the crowd became silent, a tear in many eyes. A part of their personal history was soon to be gone to make way for a bank drive-up kiosk.

Although their numbers dwindle, every year the Penn Theatre Cashiers Society still meet for lunch and story swap about ‘the good old days’. The magic lives on.

Glad to read about the"PENN THEATRE CASHIERS SOCIETY" we get together every once in awhile from theatres with ABC and PLitt in Augusta old managers,assistants,projectionists and concessiongirls and do the same thing.

I think a reunion of sorts is long overdue for former theatre people in the W3estern PA area. Our numbers are dwindling.

Anyone else have more info, or photos?

I was releif projectionist at almost every new castle theater, including the penn from 1956 on (hilander,state,victor,supercastle drive in) my father was chief projectioist at the penn theater for almost 40 years retiring when it closed.I saw or ran almost every movie that played there. I don’t remember the tiffney chandelers but do remember the giant statue of william penn setting on top of rhe marque. The cinemascope screen was large but not wall to wall as exit doors to the left & right limited size. the giant panoramic screen was not so giant for the same reason.Penn, unlike the hilander, had 3 track stereo magnetic sound but never added surround speakers.the hilander has full stereo. leo mickey was an outstanding manager. The penn had one of the largest and most comfortable projection roome i ever saw. tooooo bad it had to be torn down. it could be a fine 4-plex today and a spark plug for downtown.

The Penn Theater’s last week was April 24-30, 1968. The final film to play there was “In the Heat of the Night,” in its return to theaters after winning the Academy Award for Best Picture of 1967.